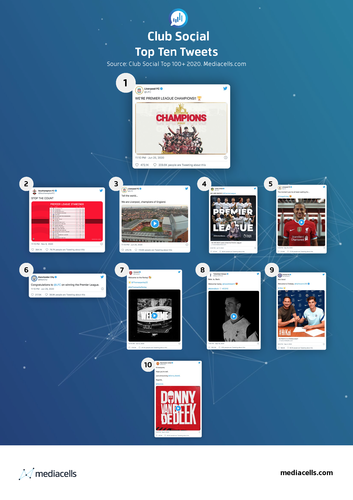 After a year of mostly fanless sports stadiums Mediacells asks, what are the implications for physical-digital event experiences in 2021?

The Mediacells Club Social Top 100+ applies a data technique to present the most engaging club social activity and then overlays a human lens to identify emerging trends in fan behaviour.

There are many successful posts showing empathy for others. For example, tributes to healthcare workers or victims of the Beirut port explosion.

"UK Football's interactions on Twitter contradict the accepted narrative around the degrading social effect of social media. AFC Marine may have lost 0-5 against Spurs in the FA Cup on January 10, 2021 but they won GBP30k in virtual tickets, a substantial amount attributed to @SpursOfficial promotions. Manchester United's Marcus Rashford has become an advocate for the social good off the pitch and when he influenced UK Prime Minister Boris Johnson's U-turn on free school meals for poor kids, the loudest digital applause came from rivals Manchester City, Liverpool FC and far beyond the football family."

The power of football to move and be moved is captured in the kind of messaging which commemorates the passing of legends like Maradona, Gérard Houllier and even Black Panther star Chadwick Boseman.

*Twitter engagement is a native metric and is calculated by combining likes, retweets, replies, @mentions.