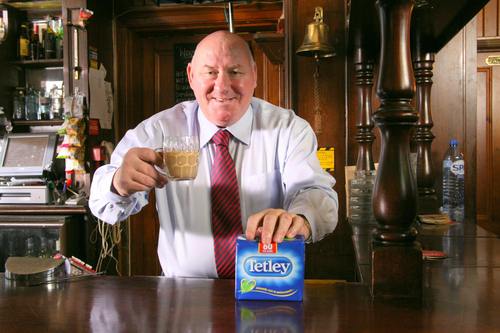 ‘Everyone’s cup of tea’ is the end line of the national TV advertisement that amusingly and creatively celebrates the fact that all different kinds of people love Tetley tea and in turn choose to enjoy it in their own style.

Crucially, the new TV stars are shown drinking a wide range of teas, while the voiceover says, ‘Tea is brilliant: that’s why Tetley make tea for everyone, from Extra Strong to Green, from Herbal to Decaf.’

To emphasize the point that it is the ‘people’s tea’, the real stars of the Tetley commercial are ordinary yet characterful individuals, picked out of the blue at their place of work or leisure by the beverage company’s casting agent.

All of the footage was shot on location, rather than in a studio, to add to the reality of the film that reflects the brand’s down to earth and friendly persona.

The 30 second film has a catchy, merry theme tune that people will be able to download free of charge as a phone ring tone, via the Tetley website (www.tetley.co.uk).

To coincide with the new themed advertising, a limited edition tea pack has been designed where a montage of over 200 smiling faces cleverly blends into a Tetley logo, again emphasising the diversity and breadth of tea drinkers.

Ray Duffin, Marketing Controller at Tetley said, “We’ve been making tea for 170 years and the success has been linked to giving the public what they want. Today that means a wide variety of teas, ranging from Green to Peppermint and new Redbush to Extra Strong. The nation’s love of Tetley is what comes across in the new campaign and we are really grateful to the 22 new stars who express this so well in their own individual style.”

Still images from the new TV commercial plus images of the new ‘People’s tea pack’ available on request.

A copy of the 30 second advert can also be emailed on request.

Samples of Tetley teas and the new ‘People’s pack’ are available on request.