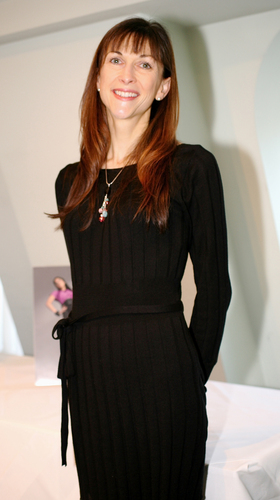 Leading hosiery brand Aristoc today celebrated the successful end to the search for Aristoc Ultra Woman initiative at a lunch attended by the nine finalists and campaign ambassadors.

Aristoc’s Ultra Woman ambassadors trawled through hundreds of entries to narrow down the finalists and decide upon the winner. The winner was revealed as Janette McCormick, the Chief Superintendent of Manchester Police’s Trafford division. Janette’s efforts in a male dominated environment have seen positive changes made in the division which covers the Trafford Centre, Manchester United Football Club and guns and gangs issues.

Janette is enthusiastic, committed, and courageous and leads from the front whilst continuing to be a devoted mother of two young children and a positive role model for friends and colleagues.

Janette won a luxury 14-night holiday to Barbados courtesy of Almond Resorts and a year’s supply of Aristoc hosiery.

Aristoc’s Ultra Woman initiative was a national search to find the nation’s most inspirational and high achieving women, covering all ages and occupations. Hundreds of nominations were received from the public who entered women who had make a difference and act as positive role models.

Sue Clague, Managing Director of Aristoc (and Ultra Woman) comments: “We were overwhelmed at the response to the campaign and it has been a pleasure to read so many powerful and inspirational stories of women succeeding in all areas of their lives.“

Samata is a self taught fashion designer who launched an award winning clothing label Samata’s Angels in 2005. Inspired by strong, ambitious women, her designs have been requested by celebrities including Jennifer Lopez and Gwen Stefani. During a trip to New York, Samata was talent spotted by J.Lo’s clothing label.

Samata won an award for Best Couture Line at the UK Urban Fashion Awards in 2006 and has showcased at many prestigious fashion events around the world.

Nicola has reached the position of Managing Director of Swissre through pure hard work, sheer determination and self-belief. A woman who competed in male dominated environment and achieved success. Nicola has proved to be fantastic role model for all women wanting to reach that dream position at the top of their game.

Julie has navigated Abbey Business Centres to their most successful results since the dot com boom, working through the ranks and beating off stiff competition in order to gain the title of Managing Director of Abbey Business Centres. Julie has worked hard to become the successful businesswoman she is today, using a combination of great business acumen and joie de vivre!

Jessica successfully runs her own women’s coaching business and is highly recognised in her profession as well as in psychology. Enthusiastic, inspirational and above all down to earth, Jessica enables women to start ‘loving’ themselves again. She writes ‘life coaching’ features for a range of national magazines including a regular column in the fashion weekly magazine, Look. Her straight talking and openness makes her very approachable and memorable to everyone she meets.

After a complete career change, Nahid created the ‘Good Vibes’ empire – a successful chain of dedicated Power-Plate studios in central London. Originally a photographer and stylist, Nahid was also one of the founding members of Scarlet magazine. ‘Good Vibes’ employs more than 15 people. Nahid’s ambition, hard work and dedication has paid off; she looks fabulous everyday (even after sleeping on the office floor) and still has time to care for everyone around her.

Marjorie is a breast cancer survivor of 20 years, modelling underwear one month after a radical mastectomy. Marjorie has also been a great support to her daughter Joanne through her breast cancer. Despite severe arthritis Marjorie still works at the age of 73, including supporting families through the stressful house buying process and family planning and has also been a hospice volunteer for the last 18 years. Marjorie has an infectious zest for life and offer loving support to her family and friends.

Jessica launched colorblindcards.com, achieving a high street presence less than a year after launch. Jessica wants to encourage other teenage mums to aspire and be successful. Colourblind cards made history by using black and Asian faces on cards that are sold through UK high street chain, Clintons. Ambitious and dedicated Jessica laughed in the face adversity to overcome obstacles in order to manifest a business vision and inspire women everywhere.

Janette is the Chief Superintendent of Manchester Police’s Trafford division (only two ranks below Chief Constable). Janette’s efforts in a male dominated environment have seen positive changes made in the division which covers the Trafford Centre, Manchester United Football Club and guns and gangs issues.

Janette is enthusiastic, committed, and courageous and leads from the front whilst continuing to be a devoted mother of two young children and a positive role model for friends and colleagues.

Penny built up her small business into a very successful ballet school whilst being a single mother of three. Penny was also the first person to start dance classes for special needs children and wrote a book The Dancing Times to encourage other teachers to do the same. In the last five years Penny has also set up her own charity, ‘The Penny Parks Trust’ which has helped hundreds of under privileged children and families, she continues to raise thousands of pounds every year. Penny is a fantastic mother, friend and teacher – compassionate, understanding, loyal and brave.

- The Aristoc Ultra Woman campaign ran from May to October 2007
- Entries were received from all over the country
- Campaign ambassadors included: