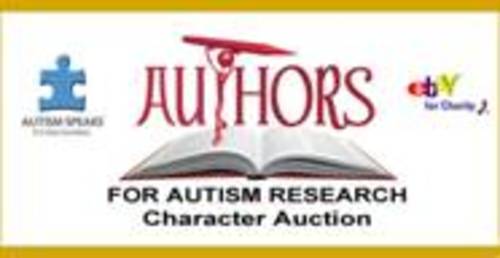 If you are a fiction fan who has dreamt of appearing as a character in a best-selling novel…your chance has finally come! For from 23 March, literary lovers around the world have the opportunity of a lifetime - to have their favourite author name a character after them in an upcoming novel.

The unique fundraiser, which is the brainchild of Henley based charity Autism Speaks, will take place on eBay.

Jodi Picoult, Louis de Bernieres and Patricia Wood are among the fifteen top-selling writers from across the globe taking part in the event titled ‘Authors for Autism Research’, and all the money raised at the online auction will be used to fund bio-medical research into the causes of autism.

Philippa Stannard, head of donor development at the charity, said Autism Speaks was delighted with the response to its event, and that the chance to take a starring role in the world of fiction had set literary pulses across the globe racing!

Philippa said: “We are thrilled to be hosting ‘Authors for Autism Research’ and very grateful to the busy authors who are generously giving their time and energy in supporting us raise these vital funds for autism research.

“Autism currently affects 1 in every 100 children in the UK, yet it remains one of the most significant but least researched developmental disorders. Autism Speaks has set itself the task of achieving major research breakthroughs within ten years. It believes that the most effective interventions will come from a clear understanding of the causes and biological mechanisms of autism.”

Autism Speaks Chair and well-known entrepreneur and philanthropist Dame Stephanie Shirley said: “Four times an hour every working day, a child or adult is diagnosed with autism in the UK. Yet autism receives only a fraction of the research funding of much rarer conditions such as childhood leukemia or cystic fibrosis. Autism Speaks is working to change this, and we hope that high profile fundraising like this will really help get people talking about why. For too long autism has been a hidden disorder. Now it is time to listen - and act."

To see a full list of the authors taking part or to bid in the auction please visit http://www.autismspeaks.org.uk and click the ‘Authors for Autism Research’ button on the home page.

For more information on Autism Speaks and its research into the causes of autism please visit http://www.autismspeaks.org.uk

Contact Details: Representatives from Autism Speaks and some of the popular authors taking part in this event are available for interview. For more information please call Esther Robinson, PR Manager on 0773 990 1832 or email esther769@hotmail.com

Autism Speaks is the only registered charity in the UK raising funds for biomedical research into the causes of autism spectrum disorders. The charity was launched in the UK by autism campaigner and philanthropist, Dame Stephanie Shirley in 2004. Click here for more http://www.autismspeaks.org.uk/about_us.html

1 in 100 children are affected by the autism spectrum in the UK. The exact cause or causes of autism are at present unknown but there is increasing evidence that accelerating autism research could transform our understanding of autism and lead to more effective interventions and treatments.