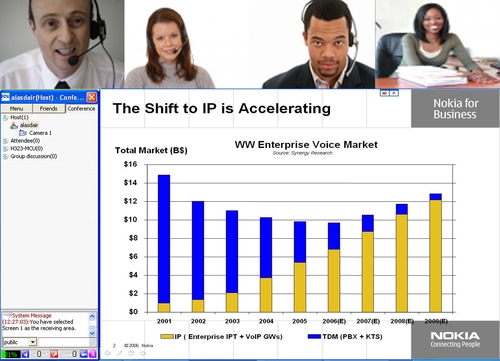 Whilst ICU™ Live! is equally at home in the global enterprise-wide arena, low entry-level pricing, from £5 per month per user and compatibility with most PCs fitted with even the most basic webcam and headset, ensures that the solution is ideally suited to SMEs.
In addition to the significant productivity improvements and reduced operational costs resulting from reduced travel to and from meetings, users also reap the rewards of faster communications and decision taking. Interaction with suppliers and customers is also transformed. Requiring just a standard wired or wireless internet connection, and taking only minutes to register and download, the benefits of ICU™ Live! are immediate. Applications are endless.

Says Stephen McKenzie CEO of ICUGlobal, “Even the largest organisations are often tied to just voice or data interaction between locations. Inhibitive equipment costs and license pricing structures have, to date, limited the spread of video conferencing and collaboration to just those with the biggest budgets.

“However, with the accessibility and affordability that ICU™ Live! brings to the market, it is even the smallest organisations that, within minutes, can derive the benefits of face-to-face interaction. Wasted time spent traveling or poor management control of staff based at home or satellite offices is now a thing of the past. We are confident that, within a few moments of downloading the trial from our site, that organizations will want this functionality at the heart of their business communication processes.”

ICUGlobal has set up a free trial download at: http://www.icuglobal.co.uk/icu-live.html

Since its inception in 2002, ICUGlobal has become one of the fastest growing companies in the unified communications arena. With considerable expertise in area such as web conferencing and online collaboration, ICUGlobal is recognised for its commitment to the three C’s: Clear, Concise and Continuous communication.

The company, which is headquartered in London, has also formed a number of strategic partnerships including: CISCO, Radvision and Polycom. Existing users of the company’s technology include Salter, the British-German Association, the University of Westminster / the City of Westminster and Motor Traders Ltd. (Autocar). In addition, ICUGlobal has helped hundreds of SME clients to take the first steps in unified communications.

Stephen McKenzie, the company’s CEO and founder was recently nominated in the IoD’s Director of the Year Awards 2007 and is a well known spokesman in the sector.