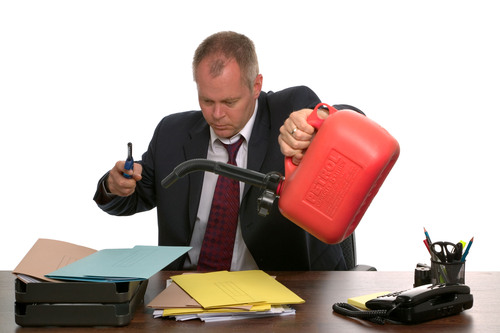 The findings of a survey by document management software company, Version One (www.versionone.co.uk), highlight that over three-quarters of senior IT professionals believe that a case of fraudulent activity on the scale of Enron could happen in the UK. Version One carried out the research with 70 senior IT professionals (IT directors and managers) across a range of public and private sector organisations.

The survey reveals that 77% of senior IT professionals believe an Enron-scale scandal could occur in the UK due to “greed, panic, lax systems and apathy”. 89% stated that someone in their organisation would be able to tamper with or ‘lose’ a document to suit their ends whilst 30% admitted that they had come across activity that could be considered fraudulent involving business documents. Two thirds of these stating that they’d witnessed document fraud “a number of times”. Only a minority of respondents (6%) feel that current UK financial regulations would prevent a similar Enron-scale case of misreporting.

Lynne Munns, General Manager of Version One, says, “A false accounting scandal mirroring Arthur Andersen and Enron will always remain a possibility without effective preventative measures in place. The consequences if a member of your finance team decides to shred invoices, credit agreements and correspondence in an attempt to disguise their poor handling of a situation could be devastating.”

Munns continues, “Organisations need to carefully consider whether their current systems and processes allow unscrupulous employees to easily commit fraud by doctoring or ‘losing’ documents, creating a false audit trail. Organisations without solid processes and systems in place need to act before it’s too late.”

In total, 86% of the survey’s 70 respondents feel that electronic document management would help to prevent fraudulent activity involving business documents. These respondents believe that such a system would create a strong audit trail and reduce the opportunity to change data or create fictitious invoices. Greater control of documents, increased security access levels to restrict tampering and the inability to “lose” scanned documents are amongst the other reasons put forward by respondents.

Munns comments, “By using a secure electronic document management system which tightly integrates into organisations’ accounting/ERP systems, documents cannot be shredded, ‘lost’ and altered, eliminating the risk of damage to an organisation’s reputation and ultimately, its bottom line. Ensuring the document management system is based on strict levels of authorisation and is integrated into systems that maintain audit trails, also makes it an essential tool for preventing fraud.”

About Enron and Arthur Andersen scandal

The Enron scandal was a financial scandal that was revealed in late 2001. In 2002, accounting firm Arthur Andersen LLP was found guilty in the US of obstructing justice, the prosecution alleging it had destroyed documents that showed its employees knew the energy giant was engaged in fraudulent activity.

Version One Ltd is the author of electronic document management and imaging solutions. These solutions enable the electronic storage, retrieval, management, enhancement and delivery of business documents such as invoices, purchase orders and statements. This 'paperless office' technology is seamlessly integrated into all major ERP and accounting systems and with a typical ROI of less than six months, Version One's solutions are enabling thousands of organisations to cut paper consumption whilst saving dramatic amounts of time and money.

This press release was distributed by ResponseSource Press Release Wire on behalf of V1 Ltd in the following categories: Computing & Telecoms, for more information visit https://pressreleasewire.responsesource.com/about.