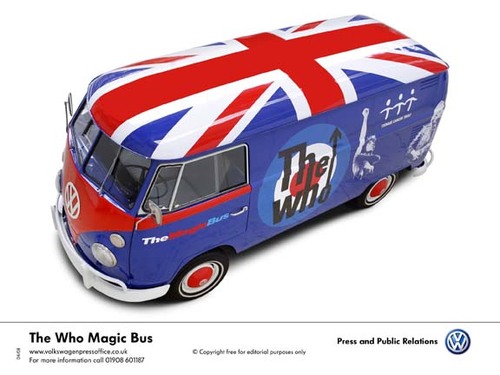 8 APRIL 2008: UK charity Teenage Cancer Trust (TCT), together with legendary rock band, The Who, are launching a worldwide competition to win a unique 1965 ‘split-screen’ Volkswagen Transporter van with special The Who ‘Magic Bus’ branding.

The competition to win the iconic van, provided by Volkswagen Commercial Vehicles, will be launched by Roger Daltrey CBE, The Who frontman and patron of TCT, on Tuesday 8 April at the opening night of the annual TCT week of fund raising gigs at the Royal Albert Hall in London, which includes performances from Madness, Muse, Paul Weller, Joan Armatrading, The Fratellis and, of course, The Who.

This unique Volkswagen van will be on display outside the Royal Albert Hall until the last TCT gig on Sunday 13 April. It has been signed by The Who’s Roger Daltrey CBE and Pete Townsend, and branded with a unique design by The Who’s art director, Richard Evans, featuring the band’s famous target logo together with images of the original band members, including Keith Moon and John Entwistle.

Tickets for the competition are available from www.thewhomagicbus.com and cost £5 each, with all net proceeds being donated to TCT. All entrants receive a free download of a previously unreleased live performance by The Who of its famous hit ‘Magic Bus’.

Inspiration for the competition stems from a successful collaboration between The Who and Volkswagen Commercial Vehicles last year which resulted in a special live performance by the band at an international celebration event of 60 years of the Volkswagen van in Hannover, Germany in October.

Stephan Schaller, Head of the Board of Management of Volkswagen Commercial Vehicles, said: ‘We really hope that many people will take part in this competition so we can help TCT to support many more teenagers with cancer.’

Roger Daltrey CBE said: ‘As a long standing Patron of TCT, I am delighted to launch this unique competition. It will help TCT raise essential funds so that we can build more teenage cancer units within the NHS. The UK is a world leader in providing this support for teenagers with cancer and in 2008 we will open five new units and start building work on a further two.’

TCT, founded in 1990, focuses on the needs of teenagers and young adults with cancer, who often receive inappropriate facilities catering for children or the elderly, by providing specialist units in NHS hospitals with state-of-the-art facilities and an environment where teenagers can meet others in a similar situation. TCT has built units in London, Leeds, Manchester, Birmingham, Sheffield, Liverpool, Glasgow and Newcastle. TCT also funds a team to teach young people in schools, colleges and universities about cancer, prevention and healthy living. Further information is available from www.teenagecancertrust.org.

Notes to editors: Electronic images are available to accompany this release from www.volkswagenpressoffice.co.uk or Newspress. Footage of the van being branded is also available. For more information, please contact John Rawlings, Press and Public Relations Manager, Volkswagen Commercial Vehicles on 01908 601478, 07872 379544 or john.rawlings@vwcv.co.uk.

The Volkswagen Transporter van is an icon and over 10 million have been produced. Volkswagen Commercial Vehicles range now includes the Caddy, Transporter and Crafter van ranges, plus the Caravelle MPV and California campervan, all available from its dedicated, nationwide network of Van Centres in the UK.

For full information, or to find your nearest retailer, go to www.volkswagen-vans.co.uk.