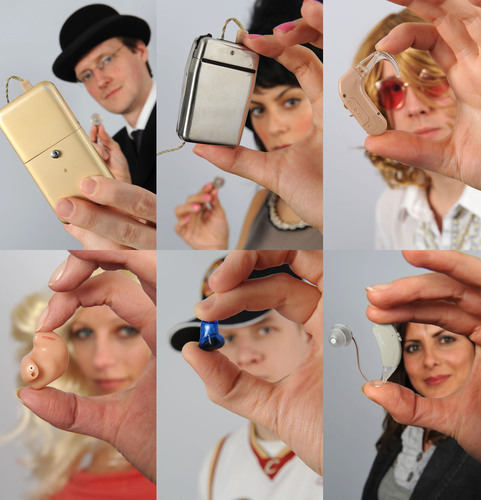 As The Hearing Company marks a milestone anniversary this year, celebrating 50 years of providing hearing care on the UK high street, we ask the question: how has it all changed?

The last half-century has seen massive advances in all things technological, with no change more pronounced than that made by the humble hearing aid.

While to many the stereotype of a cumbersome beige coloured ear-piece denoting old-age and deterioration persists, it may come as a surprise that hearing aids of the noughties have recently been profiled in Time Magazine’s ‘coolest inventions’ issue.

The Hearing Company’s professional services and training manager, Stuart Spencer, reflects: “If asked to picture an early hearing aid, most of us would recall the metal ear trumpets used by our 19th century ancestors.

“However, the first artificial hearing aids can be dated back to some 2,000 years before when the ancient Greeks used sea shells to assist those hard of hearing.

“Hearing aid development was slow – in fact, very little had really changed between the ancient Grecian shell and the 19th century trumpet.

“With a few slightly updated, although no less unwieldy, models during the late 1800s and early 1900s, it is the last 50 or so years which have seen the hearing aid transcend its bulky origins to become the high-tech, near invisible device of the present day.”

A brief history of the hearing aid 1950 – present day

1950s: The transistor hearing aid – The 1950s was a so called ‘golden era’ for hearing aid technology. Mass production and the revolution in consumer advertising meant hearing aids became cheaper and more widely worn by both sexes. Gone were the horns, trumpets and tube-like devices of previous decades.

Thanks to the invention of the transistor in the late 1940s (which amplifies electronic signals and replaced the valve in most electronic devices) hearing aids of the 1950s were smaller – roughly the size of a hand – and more powerful. Nevertheless, they were still worn outside the body, with power packs tied around the waist or strapped to the leg.

1960s: The Behind The Ear (BTE) hearing aid – While those with hearing impairment in the 1960s still had to carry their hearing aids about their body, they were, at least, getting smaller and lighter. In fact, by the end of the decade, they were even small enough to be placed directly behind or above the ear.

1970s: The analogue ‘NHS’ hearing aid – Probably the image that springs to mind when talking about hearing aids, this beige number, made available through the NHS in 1974, was the decade’s main contribution to hearing aids.

Although smaller in size than earlier models, they were still a chunky, analogue (manual) apparatus that sat behind the ear. While aiding people with hearing impairment, patients suffered considerable interference (feedback making a whistling noise) and had difficulty hearing in noisy social situations.

1980s: The In The Ear (ITE) hearing aid – Still an analogue device, the hearing aid had shrunk so much in size that it was now possible to fit the unit inside the external ear. Although not a wholly attractive model, the ITE hearing aid was more cosmetically appealing than previous chunkier ones worn outside the ear.

1990s: The Digital hearing aid – The 1990s marked the digital revolution. The analogue hearing aids of the previous decade were at first replaced by ‘hybrid’ models (part analogue and part digital) and eventually replaced by fully digital models in the late 1990s.

The crossover was like the transition from vinyl to CD; the digital models were programmed to meet each sufferer’s individual requirements and offered a cleaner, distortion-free signal.

2000s: Bluetooth hearing aids – Recently profiled in Time Magazine’s ‘coolest inventions’ issue, Bluetooth hearing aids are one of the latest applications of Bluetooth wireless technology. While helpful to the hard of hearing, users have long struggled with using telephones and other electronic audio devices with their hearing aids. Bluetooth has overcome this allowing the user to communicate whenever and wherever they want without interference and feedback.

2008: Hearing aids made cool? – Hearing loss is one of the oldest of the known disabilities and attempts to amplify sound go back centuries. But while poor vision is widely accepted across the generations, hearing loss remains stigmatized and associated with the elderly. Like short-sightedness, it is, however, a problem which affects people of all ages and is something that modern hearing aid manufacturers are successfully addressing.

Stuart explains: “Modern digital In The Ear hearing aids are so discreet they are essentially like contact lenses for ears. No one apart from the wearer themselves would know that they are using it.

“Over nine million people in the UK suffer from some degree of hearing loss but only two million seek professional advice. I believe the introduction of socially acceptable hearing aids will result in a new generation of people looking after their hearing as they should.”

Modern hearing aids are tiny digital devices worn in the ear canal that automatically process the needs of the wearer and adjust to the environment they are in. But what is next for the hearing aid?

Stuart adds: “Hearing aid technology has come so far in the last 50 years, from bulky boxes worn around the waist to tiny electronic devices worn inside the ear, that it is almost impossible to predict where we will be in another 50 or even ten years time.

“It does however look likely that within the next few years at least there will be hearing aids on the market that use artificial intelligence, recording and storing hearing patterns of the wearer and automatically adjusting to any discrepancies.”

Watch, or should I say, listen to this space.

Stuart Spencer has 25 years of experience as a registered hearing aid dispenser with Scrivens and The Hearing Company. He oversees every aspect of training for hearing aid audiologists working in the company’s branches, which cover the whole of the UK, mainly from high street locations.