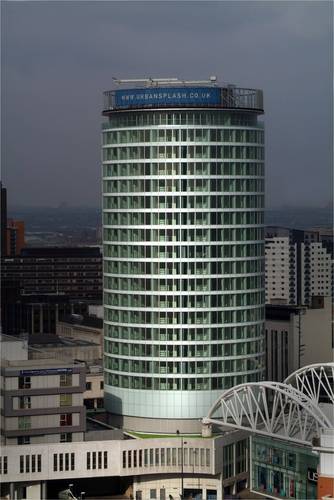 * Birmingham’s most iconic building is soon to be revealed in all of its new glory, by visionary developer, Urban Splash

* A total transformation of the city’s famous cylindrical tower into 234 breathtaking apartments: one and two bed, city pads, duplexes with terraces and penthouses

* Before and after photography
* Case studies – variety of profiles of buyers
* Available for photo shoots
* Video of Rotunda 21 Stories and audio stories of those whose lives have been touched by Rotunda http://www.newrotunda.co.uk
* Journalist stays in the hip lushness of Staying Cool’s service apartments at Rotunda
* Interviews with Nathan Cornish, MD of Urban Splash Midlands, Glenn Howells of Glenn Howells Architects, James Roberts (Rotunda’s original architect).

Since Tom Bloxham MBE and Jonathan Falkingham founded Urban Splash in 1993, from a standing start and financed entirely through the re-investment of profits, the company has created over 3,000 new jobs, 1,000 new homes and half million square feet of commercial space.
Urban Splash is currently investing over £1 billion in regeneration projects across the country, including: Castlefield, Manchester; New Islington, the third Millennium Community at East Manchester; Altrincham, Cheshire; Ropewalks, Liverpool City Centre; Royal William Yard, Plymouth; Lister Mills, Bradford and the Midland Hotel, Morecambe.

To find out more about Urban Splash, visit http://www.urbansplash.co.uk.

Glenn Howells Architects was established in 1990 and over the last 18 years, has built a track record as one of the foremost design led architectural practices in the UK.

With offices in Birmingham and London, Glenn Howells Architects has won a number of major design competitions and has received over 50 awards for projects ranging from cultural buildings, housing to larger scale urban mixed-use developments. In 2007, the Savill Building for The Crown Estate was short listed for the RIBA Stirling Prize.

Underpinning the practice is a commitment to achieving high quality projects at low cost through innovation and construction. The practice’s approach is based on understanding this vision and clients’ detailed needs and basing designs on the principles of simplicity, attention to detail and intelligent use of materials. http://www.glennhowells.co.uk

For those who missed out on the chance to buy an apartment, hip serviced apartment operator, Staying Cool, offers 15 serviced apartments, including a penthouse suite spread across the top two floors of Rotunda. http://www.stayingcool.com