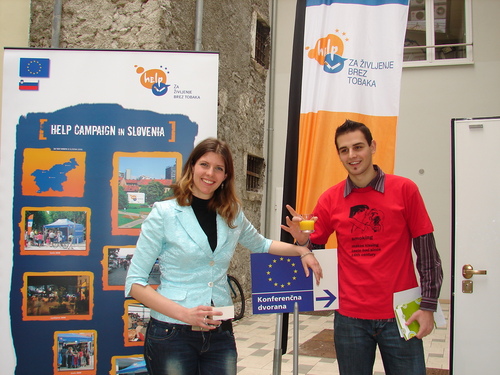 As part of its ‘HELP – For a life without tobacco’ campaign, the European Commission’s Health & Consumer Protection Directorate (DG SANCO) has teamed up with the European Youth Forum (YJF) to launch a continent wide competition for young Europeans.

The aim of the contest, which is open to all young people resident in the EU (regardless of nationality), is to empower and involve young people in efforts to reduce smoking across Europe.

Young people (aged 15 to 35) are invited to create and produce a video, image or comic that supports the positive elements of a life without tobacco: focusing on smoking prevention and young people

Submissions are requested in four categories:

The contest has already opened and closes on 30th June 2008. Entries will by judged by a panel formed from representatives of the European Youth Forum and the HELP campaign.

Entries need to tell a positive story and be able to convey their message across linguistic and cultural barriers, bearing in mind this is an EU wide contest.

Further details and rules for the contest can be found at the following web address:

Entries can be submitted via the HELP website at the following URL:

They can also be submitted by post to the following address:

Independently established by youth organisations, the European Youth Forum (YFJ) is made up of more than 90 national Youth Councils and International Non-Governmental Youth Organisations and brings together tens of millions of young people from all over Europe in order to represent their common interests. (www.youthforum.org). In 2006 and 2007 the Youth Forum actively participated in the ‘HELP - For a Life without Tobacco’ campaign with lots of local projects and with the production of the ‘European Youth Manifesto – For a Life Without Tobacco’.

The Manifesto is the outcome of a series of consultations on tobacco policy organised and run by the YFJ Member Organisations in most EU Member States (www.help.eu.com).

Tobacco is Europe’s greatest public health challenge, killing more than 650,000 people each year. This figure includes 19,000 people who have never smoked themselves. To tackle this issue, the European Commission, launched one of the world’s biggest anti-smoking communication campaigns in 2005, ‘ HELP – For a life without tobacco’. This uses a range of communication tools including television advertising, the internet; the active participation of young people from all Member States and a roadshow appearing at public places and events where the European citizens can test their carbon monoxide (CO) level.

At the outset of the campaign the former European Commissioner for Health and Consumer Protection, Markus Kyprianou, said: “The sickness and death caused by smoking costs EU countries €100 billion a year. Prevention and information campaigns like “HELP” are an investment in a healthier and more prosperous future for our citizens. As well as promoting tobacco-free lifestyles to young people, the campaign also highlights the dangers of passive smoking and supports the trend towards tobacco-free public places.”

He continued: “Eight out of ten smokers start in their teenage years. Once hooked, it is a habit that takes many of them to an early grave. Every year, 650,000 EU citizens die from tobacco related disease. I am determined to do everything I can to stop young people taking up smoking, and to help young smokers kick the habit before it ruins their health. I want to see a major shift in our society, where being smoke-free becomes the norm and the smoke-addicted are a dwindling minority."

In December 2007, the HELP campaign received the ‘European Excellence Award’ in the category ‘Consumer Health’, hosted by the international magazine Communications Director.

Press releases, press kits, logo and images from the « HELP » campaign can be downloaded from the Web site www.help-eu.com. Login: help – Password: pressdesk