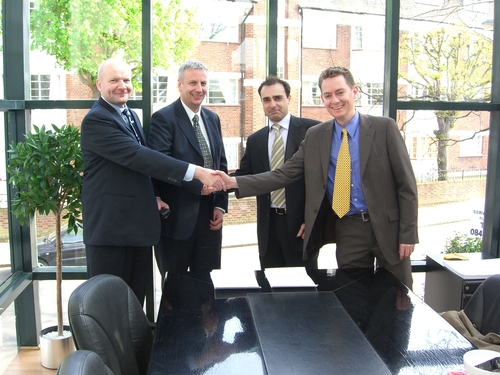 The deal is agreed, hands are shaken, and the cameras stop rolling. But what happens next for entrepreneurs that find success in the Dragons’ Den?

Hungryhouse.co.uk, the website that makes it easier than ever before to find a local restaurant and order takeaway online, was one of the successful pitches featured on the BBCs Dragons’ Den in autumn last year. They won a £100,000 offer of investment from multi-millionaires James Caan and Duncan Bannatyne, in exchange for an eye-watering 50% of the business.

But, as hungryhouse’s founders Shane Lake and Tony Charles were to find, the investment is far from secure when you shake hands. Four months after filming, post-show due diligence ground to a halt after Caan became unsure whether the business would take off.

Now, the hungryhouse.co.uk team have finally found their business angels. Bryan O’Connell and Andrew Fuller were among those watching that night, and liked the idea so much that they made immediate contact to explore the possibility of backing the duo themselves. Bryan asserts: “We have experience in investing in similar website models, and we immediately felt that this idea had legs. On meeting Shane and Tony, we were particularly impressed with their passion for the business. The team had achieved so much with so little that it was clear that our £150,000 would have a big impact on the growth. We didn’t get the equity deal obtained in the den, but then the business has grown significantly over the last 5 months - and of course we aren’t the Dragons.”

Andy says: “We felt strong empathy with the founders in terms of our technical and business backgrounds and the way that we started our first business. It was clear that we could make a contribution beyond the obvious financial help.”

Shane Lake comments: “After appearing on TV, we had literally thousands of people emailing us. It took about 2 weeks just to read through all the messages. We were so busy, we almost missed Bryan’s initial approach - which came right at the time we realised that the offer from James and Duncan wasn’t going to work out.”

Tony Charles continues: “It was great when we were offered the backing we so desperately needed by the Dragons. The exposure of being on TV was massive for us too. But when you go into the Den, aside from the positives, the one thing you can’t expect is a good equity deal! On reflection, we’re glad the negotiations with the dragons fell through – the new deal, £150,000 for a smaller equity stake - values the business at over 3 times what was agreed in the Den. It was a long process, but we finally have the money we need for our nationwide expansion.”

Hungryhouse.co.uk was launched in Putney in 2006 by Australian entrepreneurs Shane Lake and Tony Charles. The website allows visitors to read customer reviews before ordering their takeaway online – helping them find their area’s favourite restaurant without the hassle of sifting through piles of unwanted junk mail.

Launched with 12 restaurants in 2006, they now partner with 400 and are beginning their expansion beyond the M25. The website shot into the spotlight in 2007, when it attracted an offer of investment from Duncan Bannatyne and James Caan in the Dragons’ Den (view the hungryhouse pitch). It has since been nominated by Yahoo! as one of 2007’s most innovative websites.

For more information, or to schedule an interview, call or email Shane Lake - 07971 941999, slake@hungryhouse.co.uk