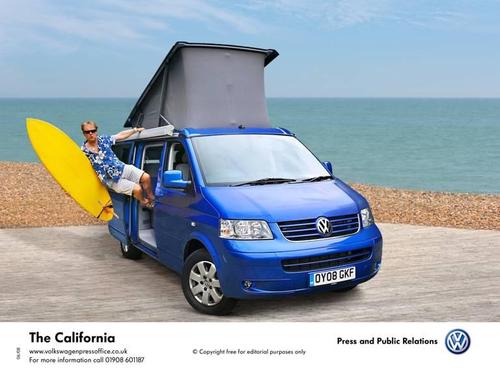 The Sunday Times has chosen a Volkswagen California campervan to circumnavigate the British coastline for a new six-week summer feature in search of the best beaches, idyllic locations and holiday destinations - all guided on the recommendations of readers.

Inspired by a renaissance in home-grown holidays, from 6th July, The Sunday Times will feature a different section of the British coastline each week as follows:

• Week 1. East Anglia and the area between Southend-on-Sea and Hunstanton.
• Week 2. Continuing anti-clockwise around the coastline covering Skegness to John O'Groats
• Week 3. The west coast from Ullapool to Southport
• Week 4. The Welsh seaside
• Week 5. The south west coast from Weston Super Mare to Torquay The final week features the south coast from Bournemouth to Whitstable, Kent.

Readers can get in touch with Chris Haslam, The Sunday Times travel writer undertaking the Campervan circumnavigation trip, at campervanman@sunday-times.co.uk to recommend the very best the British coastline can offer.

Once underway, Chris will be tracking his campervan odyssey in the a blog which can be found at http://travel.timesonline.co.uk

'When you think of a campervan it's always a Volkswagen,' says Chris Haslam. 'The California is a worthy successor to the iconic Volkswagen camper. The California is the perfect vehicle for this road trip and it's going to hurt to hand it back when the circumnavigation is over,' he continued.

The Volkswagen California campervan is car-like to drive every day and in its proportions, yet quickly converts to a home from home with two double beds, an electrically operated pop-up roof, cooker, fridge and sink, plus two folding chairs and a portable table stored neatly in the tailgate and side door.

Full details of the Volkswagen California camper are available by calling 0800 717131 or from http://www.volkswagen-vans.co.uk/california .

About the Volkswagen California
The Volkswagen California was launched in the UK in 2006 and it is the first official campervan conversion produced directly by Volkswagen in its own factory. It can sleep up to four and the California’s specification includes an electrically operated pop-up roof, camping chairs and table, fridge, sink and cooker, plus inboard fresh water and waste water tanks.