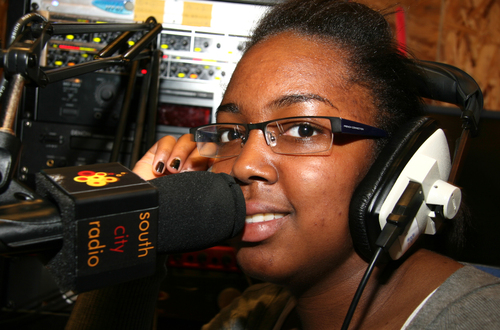 Young People Call for Peace on the Streets with launch of youth radio broadcast: ‘Reprezent’ 87.7FM’

On Tuesday 5th August 2008, Reprezent 87.7FM will launch as a live, month long broadcast on 87.7 FM or at http://www.southcityradio.org/reprezent

A much celebrated community radio station, South City Radio (formally Radio Peckham) will launch Reprezent 87.7FM. Uniquely Reprezent is a radio station run entirely by young people for young people, conveying their messages of peace and anti weapons directly to each other.

Over 85 youths, between 14- 19 will participate, present and produce all of the radio programs on Reprezent 87.7FM. Eclectic Productions, a not for profit organisation, specialising in community radio projects, has been teaching journalism, radio presenting and production skills to the young people who will be able to put their new skills to test live on air at Reprezent 87.7 FM and http://www.southcityradio.org/reprezent

The project will work in partnership with the Metropolitan Police and Choice FM to deliver their ‘Peace On The Streets’ message via the radio campaign. Young people will be able to listen to each other and offer advice from a street level, campaigning to reduce knife and gun crime in Southwark and helping to relieve London postcode tensions.

“Reprezent is an exciting project and opportunity, its great to be part of it, see it happening and make a difference, working to keep people on the straight and narrow” Bashy

Reprezent will also broadcast live from ‘The Mix Festival’, Burgess Park, South London, on Sunday 17th August 2008. The event, which looks to be one of the biggest public displays against gun and knife crime in the UK is set to host 20,000 young people all celebrating ‘Peace On The Streets’ and signing up for the anti-weapons pledge.

Notes:
South City Radio is a community radio station run by Eclectic Productions, a not for profit organisation based in South East London. Eclectic has been producing successful community radio projects across the country for over 5 years. It also provides consultancy, outreach services and accredited training courses in all aspects of radio and music production. For more information please go to www.eclectic-productions.co.uk