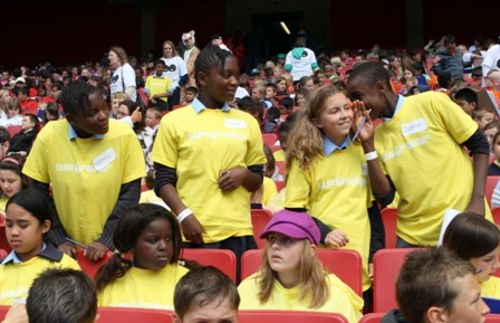 A new Guinness World Record has been set today, Friday July 11th for the longest game of Chinese Whispers involving 1,330 children and celebrities from the world of sport and entertainment.

Staged at Arsenal Football Club's Emirates Stadium, the record breaking children have already raised more than £100,000 for Save the Children and TreeHouse, the national charity for autism education.

The attempt which lasted for 2 hours and 4 minutes beat the existing record held by the Cycling Club of Chengdu, China, involving 1083 people in 2006. In the last 2 years, there have been seven unsuccessful attempts to smash the record.

With monitors from Guinness World RecordsT in attendance, the children formed a huge circular formation seated in Emirates Stadium's lower East Stand, and the Chinese Whisper started with the message 'Together we will make a world of difference' highlighting to the children that by working together they can help others lead happier, healthier lives.

Joe Jaina, Senior Lecturer at Cranfield University in organisational behavior commented on why the message changed so dramatically: "It is very human to delete, construct, distort or generalise the original message based on the receiver's personality. Individuals often add their own meaning to information and this is often due to anxiety.The person receiving the whisper often becomes anxious and concentrates on the anticipation of receiving the whisper, rather than the whisper itself which results in the misinformation.

"Alternatively a different, perhaps more intuitive personality will tend to add pre-determined assumptions into the message, hence the popularity of celebrity gossip!"

Organised by BI, the UK's leading communication and motivation company, in partnership with Arsenal FC, TreeHouse and Save the Children, the event saw children aged 7-11 from the Milton Keynes area, join forces with children from north London who participate in Arsenal in the Community initiatives and children's groups associated with both charities.

Money raised through the event will be used to further TreeHouse's plans to open a National Centre for Autism Education in north London and will raise money for Save the Children's biggest-ever global campaign to stop 10 million children dying each year before their fifth birthday.

And Sir Steve Redgrave comments: "This is a fantastic achievement by all the children involved. It has been an honour to support these record breakers in their efforts to raise money for both TreeHouse and Save the Children. Both charities undertake vital work and The Chinese Whispers event has been all about helping children help each other."

Vicky Lincoln, Fundraising Manager at TreeHouse added: "We are so thrilled that we managed to break the world record today. But ultimately, getting children to think about issues affecting other children and raising awareness and funds on such a huge scale was what it was really all about. This event was a great opportunity for TreeHouse to raise awareness about autism and the positive effect that the right education can have on children with autism. And although they do find communication more difficult, it was fantastic seeing them enjoying themselves today and participating in the Chinese Whisper alongside their peers. Congratulations everyone!"

Tanya Steele, Director of Supporter Relations and Fundraising at Save the Children says: "We're absolutely ecstatic that we've made it into the Record books with this event and it's been fantastic to see so many children here today supporting our cause. It has been an amazing fundraising event and we're hugely grateful for this overwhelming show of support. Through this world record-breaking event, children from the UK will help save children's lives around the world and show that it's simple to save a life"

Richard Bandell, Managing Director, BI adds: "Setting a new Guinness World Record for these two amazing charities at Arsenal Football Club's Emirates Stadium was hugely exciting and great fun, but this event is all about enabling kids to help other kids and showing them that giving can be even more rewarding than receiving."