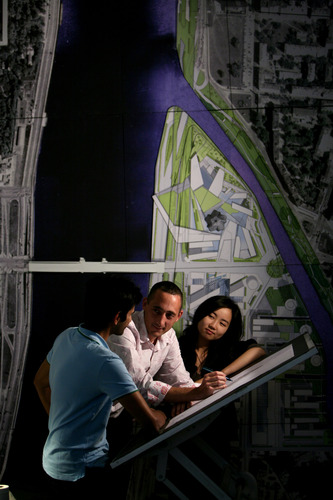 EMBARGO 00.01 hrs Tuesday 15th July (launch of ‘Architecture for Everyone’)

A £1 million scheme to open up the exclusive world of British architecture to talented ethnic minorities is being launched tomorrow.

The initiative is in memory of murdered teenager Stephen Lawrence, whose ambition was to be an architect.

Fifteen years after Stephen’s murder, Britain’s racial divides are all too evident in the affluent, white middle class world of UK architecture, where according to RIBA just 2% of professional practising architects are black or ethnic people.

Architecture for Everyone aims to transform Britain’s inner cities “from the inside out” by encouraging local, under-represented young people to become architects and shape their own environment. They will be reached via youth centres, music and club venues in informal workshops delivered by senior practising architects and architecture schools.

A national competition will select the six most promising participants to go to the world-renowned Harvard Graduate School of Design in Boston for an intensive introductory course in architecture. Bursary awards will also be offered to finance aspiring architecture students throughout their university studies.

RMJM say that accessing the talent of black and ethnic communities makes sound commercial sense to the industry, as experts are predicting a worldwide shortage of architects alongside a worldwide construction boom.

Doreen Lawrence OBE, mother of Stephen, said today: “While Stephen was tragically prevented from fulfilling his dream of becoming an architect, this initiative will empower many other young people to re-discover and fulfill their dreams. By learning from some of the world’s leading architects who work for a company comprising many nationalities and cultures, some of our best young talent from throughout the UK will be inspired, benefit from practical support and have a real chance of becoming the urban designers of the future.”

RMJM’s CEO Peter Morrison said: “This is much more than a worthy initiative, it’s got a commercial and cultural imperative. There’s going to be a global boom in the construction industry and, if we don’t take action now, we will not have sufficient architects to service demand and those buildings we do design will be built by white, middle class architects. We will be all the poorer as a nation for this lack of diversity.”

Case studies for interview and photographs are available

"The ‘Architecture for Everyone’ scheme is a really good idea because you are getting people involved that are mostly non-white. It gets people off the street, more involved, and more aware of architecture as a career. I think you will get a lot of young people interested in it, saying, “Can I come and have a chat about it? How is it going to benefit me, how can I contribute?” It will get people involved in designing buildings and doing projects.

People from Africa or Asia don’t have enough resources to finance these sort of courses. A lot are successfully doing IT now after being encouraged by various schemes and and it is the turn of architecture now. It is something you do practically. It will get more architects, benefiting the country and the finances of the country.

Architecture matters to everyone who says “Wow, that is a nice building!” To be part of a team who design a whole building, or a room, is amazing. I like the idea of being part of a project, or working in a firm playing around, brainstorming different ideas, tecnhiques, colours.

With my fiancee I watch a lot of design programmes like Grand Designs - we watch it two or three times a week. How they design the house, where they get the wood, how they cut the wood to make arches.

When I spoke in the street with the architect we talked about the connection between food and architecture. As a chef, when you put food on the plate you don’t just throw it on the plate. It is about how it looks , how the sauces go etc. I saw food as art, and that is why I became a chef when it was impossible for me to become an architect.

I wouldn’t say the five years I did technical drawing from age 13 to 18 were wasted, but I could have taken it a lot further. I am glad others will have a better chance than I did. I did not get a fair opportunity, financial-wise."

The Stephen Lawrence Centre, managed by the Stephen Lawrence Charitable Trust, opened in February this year with the aim of increasing the number of young people who pursue a career in urban design, the built environment and the architectural professions whilst bringing about lasting improvements to those whose life chances are constrained by economic, cultural and social hardship.

• RMJM is a UK-based, international firm of architects, employing 1200 people across its network of 16 offices in the UK, Europe, the Middle East, the Far East and the United States.

• RMJM’s expertise and design-led approach is successfully demonstrated in on-going projects in more than 15 countries spanning a wide range of key sectors, from corporate headquarters and waterfront residential developments to major public buildings, university campuses and large-scale regeneration programmes. The company currently has £8 billion worth of construction projects on its drawing boards, including some of the world’s most high profile and ambitious projects, including the tallest building in Europe for Gazprom in St Petersburg and the biggest ever media centre at the Beijing Olympic Building.

• In March 2008, RMJM donated $1.5m to the prestigious Harvard Graduate School of Design in Boston to run a new programme aimed at arming students with both design and business skills, an increasingly important combination which should lead to better rewards and attract more architects into the profession.

About The Stephen Lawrence Charitable Trust

• Stephen Lawrence Prize for architecture is inaugurated in 1999 as the second largest architectural prize in the UK, awarded alongside the Stirling Prize.

• The Stephen Lawrence Inaugural Memorial Lecture was given by HRH The Prince of Wales in 2000. Speakers for this annual lecture (held at RIBA over the past two years), have included Dr. Maya Angelou, Trevor Phillips OBE, Lord Richard Rogers, Spencer de Grey OBE, Michael Mansfield QC, Sir Keith Ajegbo OBE and Sunand Prasad (President of RIBA), among other distinguished figures

• In 2003, the Stephen Lawrence Centre’s Deptford, south east London site was gifted to the Trust by St. James Group. The freeholder, Thames Water, grants the Trust a 999-year lease at a peppercorn rent.