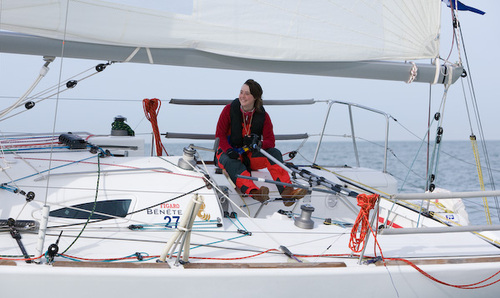 When Katie Miller entered the bluQube Solo 1000, the aim had been simple: to qualify for the OSTAR single handed race. The last thing she expected was to win her class.

But that is exactly what she did do, as well as taking overall honours, awarded the “Saltire Quaiche” for best rookie and the bluQube Endeavour Trophy voted for by competing skippers.

The bluQube Solo 1000, organised by Petit Bateau, was made up of three legs from Mylor-Kinsale-Santander-Cameret sur la Mer. The Kinsale to Santander leg represented the official qualifier for the OSTAR 2009.

This, Katie’s longest and most challenging solo trip to date and first significant offshore race, has been the biggest event in the racing calendar for this year and something she and Mark have been working toward since acquiring the boat in April.

Katie said “The bluQube Solo 1000 mile race has been an incredibly steep learning curve. Dealing with both extremes of weather combined with sleep and food management in an extreme and competitive environment has been a new and thrilling experience. It has also been a fantastic opportunity for me to learn further about the boat and its limits, and confidence is ever growing. What I was especially pleased about was the reliability of all my equipment, especially the Raymarine autopilot, since a lot of the fleet had been dogged with equipment failure. To come out on top was unexpected but it definitely rewards the work that Mark and I put into the endeavour. I loved every minute!”

Katie, who is currently studying Yacht Production and Surveying at Southampton Solent University, has been sponsored by Raymarine and McMurdo since her circumnavigation of the UK in 2006 to raise money for The Ellen MacArthur Trust. Both companies have continued their support onto this, her next challenge.

21 year old Katie only started sailing when she was 13, on a family sailing holiday in the Mediterranean. Being from the Midlands sailing wasn’t a huge part of everyday life, but she persevered, gaining her RYA Day Skipper qualification in 2005 and forming a dream to sail solo around the country in 2006. After raising £10,000 for The Ellen MacArthur Trust and gaining her RYA Yachtmaster qualification, Katie won the Raymarine Young Sailor of the Year award in January 2007 in recognition of her seamanship and courage during her circumnavigation of the British Isles. Now, Katie has managed to acquire a Beneteau Figaro II, a highly competitive offshore racing yacht, and has great challenges on the horizon. The biggest…. The OSTAR 2009, solo transatlantic.

Petit Bateau was formed by a group of entrants in the 2000 OSTAR as a means of exchanging information and expertise. Since then it has grown to a membership of over 360 sailors in twelve countries. Joining is free. The only requirement is an enthusiasm for short handed and solo yacht racing. All levels of skill and experience are welcome. The current membership ranges from novices to OSTAR winners, circumnavigators and Olympic medallists.
High Resolution images are available upon request. For further information contact Katie Miller on +44 (0)7732 610828 or katie@katiemillerracing.com; or Mark Lamble on +44 (0)7525 631267 or mark@katiemillerracing.com; or visit http://www.katiemillerracing.com