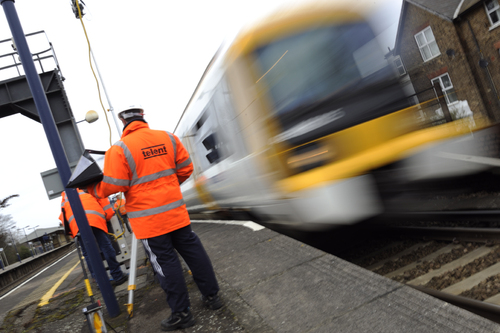 21st July 2008 – telent has been awarded a multi-million pound contract by Network Rail to upgrade communications as part of the Thameslink Project.

telent will design, install and commission an upgraded operational communications system and cable network for the Project which is designed to cater for increased commuter demand and will also benefit visitors to the Olympics. By the end of 2012, longer 12-car trains with 50% extra capacity will be running on the route between Bedford, Central London and Brighton. There will also be a 200% increase in the number of trains running through the heart of London.

“The Thameslink Project, which is both technically and logistically complex, requires competence and teamwork to ensure its successful completion.” said Steve Pears, General Manager of telent’s Rail division. “The Thameslink route is one of the busiest in the UK and is required to remain in operation during the upgrade. This places additional responsibilities on the team to ensure that the travelling public are not inconvenienced during the upgrade work. telent’s track record in the rail industry is second to none and Network Rail’s choice of telent for this challenging, high profile project underlines their trust and confidence in our capabilities.”

Network Rail is planning to build new track, new stations, extend platforms and improve signalling on the Thameslink route which is one of the busiest rail corridors in Europe. This work represents a total of £3.55bn of investment.

The route for the contract passes from Kentish Town in the North, through St Pancras International (sub-surface), Farringdon, City Thameslink and Blackfriars stations, to London Bridge, Elephant & Castle and Herne Hill stations in the South.

The scheme began in October 2007 less than three months after funding was announced. Work has begun to extend all four platforms at Luton Airport Parkway to enable longer trains to stop in the future. A further twenty-two stations will have their platforms extended before 2011. The major works at Blackfriars, Farringdon and Borough viaduct begin in January 2009. Work to radically overhaul the track layout to the east of London Bridge is planned to begin after the Olympics in 2012.

telent supplies a broad range of communications support services to telecommunications operators and transport organisations as well as to large enterprises and government agencies in the UK and Germany, leveraging its accumulated knowledge of customers’ networks, its expert field force, its scale and reputation for quality. Additional information about telent can be found at www.telent.com

Copyright © telent Limited 2008. All rights reserved. All brands and product names and logos are trademarks of their respective holders.

It is possible that this announcement could or may contain forward-looking statements that are based on current expectations or beliefs, as well as assumptions about future events. These forward-looking statements can be identified by the fact that they do not relate only to historical or current facts. Forward-looking statements often use words such as anticipate, target, expect, estimate, intend, plan, goal, believe, will, may, should, would, could or other words of similar meaning. Undue reliance should not be placed on any such statements because, by their very nature, they are subject to known and unknown risks and uncertainties and can be affected by other factors that could cause actual results, and telent's plans and objectives, to differ materially from those expressed or implied in the forward-looking statements.

telent undertakes no obligation to revise or update any forward looking statement contained within this announcement, regardless of whether those statements are affected as a result of new information, future events or otherwise, save as required by law and regulations.

This press release was distributed by ResponseSource Press Release Wire on behalf of The Amber Group in the following categories: Computing & Telecoms, Transport & Logistics, for more information visit https://pressreleasewire.responsesource.com/about.