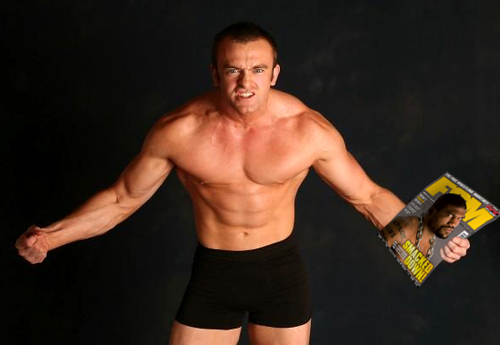 The many worlds of sports entertainment collided in explosive fashion this week, as Nick “Oblivion” Aldis – star of the hit Gladiators television revival – joined the writing team of Fighting Spirit Magazine (FSM), the world’s only monthly publication dedicated to professional wrestling and mixed martial arts (often referred to as “cage fighting”).

The outspoken Aldis, whose scathing interviews have seen him emerge as the unofficial star of the Sky One series, is in good company at FSM. The 6’3” Gladiator, who wrestles on the British circuit and will be appearing in Snow White during the pantomime season, joins former World Wrestling Entertainment superstar Lance Storm and British wrestling icon “The Showstealer” Alex Shane on the all-star editorial staff.

"I'm ecstatic to be a part of the FSM team,” said Aldis, whose first column, ‘Corporate VS Creative’, appears in FSM issue 30, on sale now. “There is credibility, knowledge and talent throughout the magazine, and James Denton showed incredible wisdom when he brought ‘The Big O’ on board, because I've been looking for somewhere else to air my views and this is my number one choice! If you thought what I had to SAY was controversial, wait until you read my column.”

Denton, the magazine’s editor, agrees that the Gladiator’s outspoken views will cause a stir. “Oblivion is as incendiary on the page as he is on the screen. His second article, ‘Muscle Matters’, will REALLY cause a stink, given current attitudes towards muscular physiques and the means by which they’re attained – especially in an issue of the mag where we look at steroids in sports, wrestling and the Olympics.”

In addition to the masters of the ring, the FSM writing team also includes RD Reynolds, author of the popular ‘WrestleCrap’ series of books; Bryan Alvarez, a wrestling and MMA insider and co-author of best-selling book ‘The Death Of WCW’; and Bill Apter, a 20-year broadcaster who has his own magazine sub-genre – the “Apter mags” – named after him.

“Adding Oblivion to the team is the latest step in our ongoing philosophy,” concluded Denton. “FSM isn’t just written by a bunch of outsiders looking in; we give you the inside scoop from the biggest stars and most respected experts in the industry, from UFC legend Dan ‘The Beast’ Severn to WWE veteran Lance Storm. Other mags claim to be authoritative, but there’s no greater authority than The Big O!”

Visit www.fightingspiritmagazine.co.uk for a full preview of FSM issue 30, featuring cover star Quinton “Rampage” Jackson of the UFC, on sale for just £2.99 from all good retailers.

Fighting Spirit Magazine is an 84-page, full-colour monthly. Distributed internationally, FSM is regarded as the leader in its field, thanks to its groundbreaking editorials on issues such as anabolic steroid use, domestic violence and child abuse within the professional wrestling industry. It is produced by Uncooked Media – the specialist publisher behind Asian action and animation magazine, Neo, and leading videogame publication 360 Gamer.