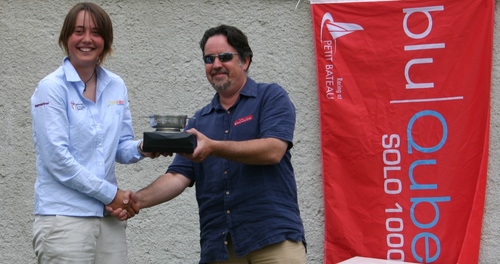 - Youngest in the field sweeps the trophy board

Bristol, 22nd July 2008 – The winner of the main prize for this year’s bluQube Solo 1000 race organised by Racing at Petit Bateau is Katie Miller, a 21 year old from Birmingham, currently studying at Solent University in Southampton. Although the least experienced in the field, Katie not only won the overall ‘Anna’ prize, but also won ‘Best Rookie’, ‘The bluQube Endeavour Trophy’ and ‘Best in Class’ with her boat ‘Hot Socks’, a Beneteau Figaro two. The coveted IRC Award was won by Nick Martin with his J 105; Diablo J. The awards were presented by C.E.O of bluQube, Simon Kearsley in Camaret, France where the race finished on 12th July.

Katie is regarded as one of the UK’s most promising young sailors and was previously presented the Raymarine YJA Young Sailor of the Year Award in 2006 by Dee Caffari. The bluQube Solo 1000 involves 3 legs (Mylor to Kinsale, Ireland – 185 miles, Kinsale to Santander - 525 miles and Santander to Camaret - 290 miles, covering a total of 1,000 miles.

Of the twenty solo skippers that took part, ten were forced to retire. According to Katie some of the weather conditions especially on the second leg between Kinsale and Santander were the most challenging she had seen with 35 knot winds. Katie commented after the race, “This was the most nervous I have ever been before and during a race. At one point during the trip to Santander through the Bay of Biscay I was really scared and at the time was wishing I was back on dry land. During this leg I went 30 hours without sleep, and managed to powernap for 20 minutes at a time for the rest of the journey.” Katie was nearly forced to retire after the 1st leg in Kinsale after her alternator failed and the batteries went flat, but fortunately project manager Mark Lamble drove all the way from Southampton with a replacement and replaced the faulty unit in the early hours of the stop over at Kinsale.

She continued, “Although the second leg was pretty terrifying, the final leg was worse for different reasons. There was very little wind and it was quite frustrating having to sit and wait for hours at a time. The wind then thankfully picked up again back into Camaret. The welcome party was overwhelming with my parents, race organisers Paul Pegg and Jerry Freeman of Petit Bateau and the race sponsors bluQube, all on the pontoon waiting for me. I was really ecstatic to get there in one piece. Overall there was a great camaraderie between all the contestants and I knew that, although at times I felt very alone, there were other boats nearby that I could call on if I ran into trouble and could talk to on the VHF radio.”

CEO at accounting software provider and title sponsor bluQube, Simon Kearsley who presented Katie with her awards said, “This was an incredible achievement for an individual with so little previous experience of long-distance solo sailing. Katie certainly came from behind after a disappointing first leg when she says she was really just getting used to the boat. The first leg at 185 miles was the longest that Katie had ever sailed, so winning the whole race was an incredible feat. Katie has demonstrated unbelievable maturity and tenacity to beat some her rival competitors, some of which have a considerable number of more years under their belt. We wish Katie luck in her future as a professional sailor.” Katie has one more year left on a degree course in ‘Yacht Production and Surveying’ at Southampton Solent University.

Nick Martin, winner of the BluQube 1000 Solo IRC Trophy and owner and skipper of his J105 'diablo-j' commented, "I am absolutely delighted with my result. This was my biggest personal sailing challenge so far. My main objective was to complete the race and second was to secure a top three place in IRC, so securing the overall 1st position under IRC was a huge achievement for me. I have completed many RORC two-handed races in previous years, including two Fastnets, but this took the challenge to new levels."

Nick won the RORC 'Alan Paul Trophy' and came 2nd in the RORC Two-Handed division in 2007, having competed with fellow BluQube 1000 Solo competitor Barry Hurley. He also won the J Boat trophy, presented by J UK, for the lead J boat under IRC.

He added, "The conditions became quite demanding, with gale force 9 winds experienced between Kinsale and Santander. Two reefs in the main and a No.4 headsail suited 'diablo-j' well as we kept powering through. These waters are very different from sailing in the English Channel. There was very little time for sleep and a 10-20 minute watch pattern was maintained throughout. On the last leg, I thought I might throw away my lead by unfortunately sailing into a hole, but a later spinnaker reaching leg really helped regain lost ground as it suited my J105 really well.”

The most experienced sailor in the fleet Mary Falk(aged 62)was forced to retire during the second leg after her auto pilot stopped working and she lost all of her instruments. At 220 miles from Santander and 150 miles to Camaret, Mary decided to head back to Camaret. She commented, “My command of French is better than Spanish so I thought I would have a better chance of explaining what had happened to my equipment and getting it fixed in France. The trip back was pretty hairy though. Near to the continental shelf I had force 7 winds and enormous differences in depth. Without my electronic chart plotter it was very difficult. Not only did I have to rely on my chart maps to avoid the rocks, I went 3 nights without any sleep - just as I was about to nod off, a wave would wake me.”

Many of the sailors, including Katie have qualified and plan to take part in the Ostar in 2009, the legendary solo Atlantic crossing of over 3000 miles which starts on Monday May 25th from Plymouth and finishes in Newport, Rhode Island some 20 to 30 days later.

You can read other sailors experience of the race by logging onto skipper blogs via the Petit Bateau website www.petitbateau.org.uk

Petit Bateau was formed by a group of entrants in the 2000 OSTAR as a means of exchanging information and expertise. Since then it has grown to a membership of over 360 sailors in twelve countries. Joining is free. The only requirement is an enthusiasm for short handed and solo yacht racing. All levels of skill and experience are welcome. The current membership ranges from novices to OSTAR winners, circumnavigators and Olympic medallists.

The PB forum allows immediate access to a wealth of expertise and advice, plus an archive of “posts” going back over 7 years. PB members now cooperate in organizing an extensive programme of quality single-handed races. In 2008 they will range from a four race series based in the Solent through to a 1000 mile oceanic challenge sponsored by bluQube which has been designated the official qualifier for OSTAR 2009.