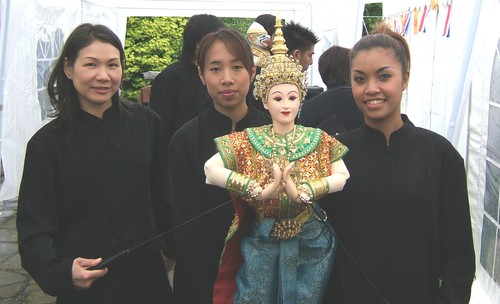 Between 4,000 and 5,000 people from across the UK are expected to descend on the small Staffordshire village of Kings Bromley to sample of all things – the delights of Thai Food and Culture – with more than a touch of home-grown food and fun as well.

To add an intriguing touch, Thai Pop idol Jonas - who happens to be Swedish by birth, is flying in especially for an intimate evening concert limited to 450 people. He will be joined by artists from Holland and Thailand.

The daytime programme will include an outdoor performance by the East Midlands Youth Jazz Orchestra.

The Festival has been organised by the local Buddhavihara Thai Buddhist Temple based at the historic Eastfields House - once part of the Earl of Lichfield’s Estate. Funds raised on the day will be used to fund the Temple which is a registered charity.

The day also features a continuous programme of entertainment that begins at 10am and includes Thai Dancing Theatre puppets, Thai Boxing and Sword displays and the first UK Thai British Costume contest.

There will be Thai and British food - and all of this can be swilled down with traditional Thai Beer.

Thai Buddhist Monks based at the Temple will be performing traditional chants. Demonstrations of carving, flower arranging, cookery and handicrafts laced with various musical performances will also be taking place.

There will be more traditional entertainment for children including a magician, punch and judy, funfair and face painting.

The Buddhavihara Temple enjoys strong support from across the Midlands including Derby, Burton, Birmingham and the Black Country. It also enjoys a national and international reputation. Details can be found on its web site www.watthaiuk.com or by telephoning 01543 472315.

The event will be opened by the Thai Ambassador to the UK and by the Lord Lieutenant of Staffordshire, James Hawley.

It will be held in the showground at King Bromley and will be the largest event of its kind outside London.

Background details of the Temple and the Abbott are also available.

Information on Jonas
Jonas and Christy are two Family members who are celebrities in Thailand for their lukthoong singing.
(Lukthoong is a form of traditional Thai country music. Jonas and Christy have topped the music charts with their lukthoong CDs, made numerous public and TV appearances, and been the subject of feature articles in national and international newspapers and magazines.

Event organised by the Thai-British Buddhist Trust - a UK Charity Registered No. 1082096