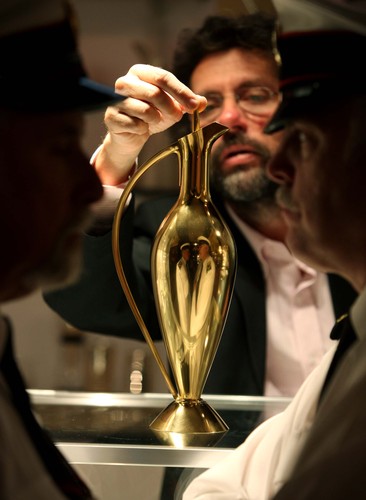 A STUNNING pure gold claret jug is on show for the first time at Goldsmiths’ Fair, which is currently taking place at Goldsmiths’ Hall in the City of London until Sunday October 5.

The jug, which weighs 2.1 kilos and stands 38cms high, was designed and made by silversmith – or in this instance – goldsmith Martyn Pugh in his Worcestershire workshop as a special commission for a client, a Worcestershire-based businessman, who has collected Martyn’s works for 15 years.

With the recent rise in the price of gold the jug has already increased in value by 20 percent. The jug is of course unique, but to commission a similar jug from Martyn would cost in the region of £250,000.

Martyn explained that: “My client wanted an asset that wasn’t simply a value on a piece of paper but something that was beautiful and tangible, that combined both the intrinsic value of gold with uniqueness and artistry. He now has an asset that he can use and enjoy on a daily basis as well as being a future heirloom for members of his family – or as my client said “an everlasting investment.”

The idea for the solid gold jug was conceived some years ago but before it could become a reality Martyn had to do a considerable amount of research and experimentation to find a gold that would be strong and practical enough. Gold in its pure state is a soft metal and Martyn felt that 24carat gold would not be able to serve the purpose of a jug which was to be in frequent use.

His research led him to a gold which is 99 percent pure with an alloy of one percent titanium. This particular gold has a special quality of being able to be fashioned in a soft condition and then hardened by heating. Although it had only previously been used for making jewellery and not a piece on such a large scale, Martyn realised that it could provide the solution to the problem and suddenly the jug became a possibility.

The gold was consequently purchased and the jug made and finished just in time to go on display at Goldsmiths’ Fair before being delivered to the client.

This press release was distributed by ResponseSource Press Release Wire on behalf of The Goldsmiths Co. in the following categories: Personal Finance, Business & Finance, for more information visit https://pressreleasewire.responsesource.com/about.