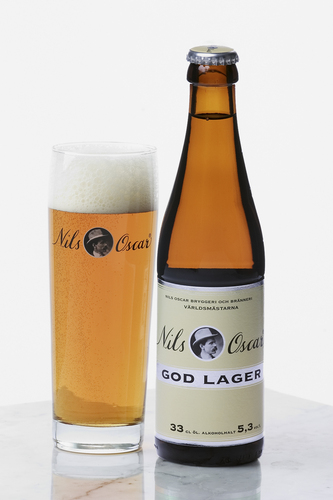 The arrival in the UK of one of Sweden’s most famous beers – God Lager, from the Nils Oscar Micro-brewery - is certainly cause for celebration. The beer is brewed literally from grain to glass on the Nils Oscar farm to produce a pilsner style beer described as ‘well balanced with malty sweetness and a hoppy dryness to finish’.

God Lager might be divine to drink – but it’s certainly not blasphemous. ‘God’ means ‘good’ in Swedish and was the obvious name for the company’s best selling beer. Swedish beer enthusiasts describe this lager as ‘heavenly’ and the brewery is sure that UK beer lovers will soon be converted.

This multi-award winning ‘dark’ lager is produced in one of the most well known and well respected craft breweries in Scandinavia. The Nils Oscar Brewery is almost unique in controlling the whole lager brewing process. The company owns the farm where the grain is grown, malts the grain in its own malt house and brews the beer all under one roof, thereby ensuring total control and the utmost quality from grain to glass.

Only the hops are bought in because Sweden is too far north to cultivate them. However, the brewery uses four hop varieties in its brewing to give the beer ‘aromatic properties’. The brewery has won over 50 medals since 1999 including awards at the Stockholm Beer Festival and the American World Beer Cup.

“At Waitrose we are renowned for sourcing and stocking a wonderful range of bottled beers and Nils Oscar God Lager is a superb addition to our shelves. We were very impressed with its depth of flavour,” says Waitrose beer buyer Neil Whelpton, “It is perfect to enjoy on its own and also with roast chicken and should appeal to our customers who know and love their beer.”

Product Information: - God Lager is now widely available in the UK through Waitrose supermarkets and will shortly be appearing in a bar, pub or restaurant near you. It is unpasteurised, 5.3% abv, 330 ml, RRP £1.49.

The Nils Oscar Micro-brewery/distillery was established in 1996 to produce a range of fine beers and spirits to traditional and authentic Swedish recipes. Most of the ingredients are grown on the farm owned by the brewery based in the rolling farmland less than an hours drive from Stockholm.

Today the company brews a range of ten beers and distils vodka and aquavit.

The brewery was founded by Swedish entrepreneur, Karl-David Sundberg, who named the business after his revered grandfather, Nils Oscar, who farmed in the same area of Sweden.