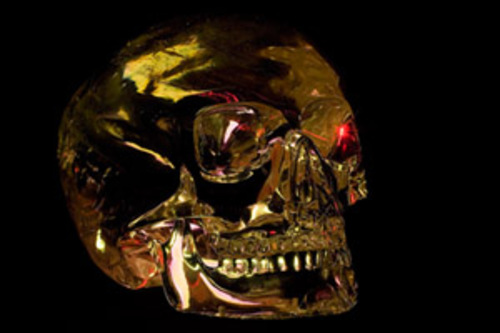 On November 22-23, 2008, the famous Mitchell-Hedges Crystal Skull – also known as the “Skull of Doom” – will be on public display in Edinburgh – the first such event in the United Kingdom ever.

The Histories & Mysteries Conference will be hosting this unique artefact, which so obsessed film director George Lucas that he made it into the theme for the long-awaited fourth Indiana Jones movie, “Indiana Jones and the Kingdom of the Crystal Skull”. The film was released in theatres on May 22, 2008, and is released on DVD in the UK on November 10, 2008. The movie has numerous references to Mitchell-Hedges and the Crystal Skull, though in the end, the movie focused on a more science-fiction, alien-looking skull.

It might seem a subject created just for Halloween, but the so-called “Skull of Doom”, as the Mitchell-Hedges Crystal Skull was originally known, is one of the most enigmatic artefacts in existence on this planet. Some have claimed that certain people who have stared in its eyes, become “entranced” by it and make contact with an intelligence, which some of the claim is extraterrestrial or extremely ancient. This angle was also explored in the Indiana Jones movie, where the adventurer himself was forced to stare in the artefact’s eyes, his mind apparently succumbing to the “power” resident in the skull.
With stories like this, it is no wonder that science fiction writer Arthur C. Clarke decided to use it as the logo of his “Mysterious World” television series in the 1980s. But he is but one in a long list of people that have become enthralled by this artefact, which is – as a piece of art – truly astonishing, and unique in the world.

Despite such public exposure, we know very little about it:

- How F.A. “Mike” Mitchell-Hedges acquired it, is unknown, though it is known to have existed in 1931; it was studied by the British Museum in 1936 and stated to be of pre-Columbian origin.

- As the skull is made of rock quartz, it is impossible to date.

- Mitchell-Hedges himself claimed it was called the “Skull of Doom” and was able to “will death” by the Mayan priests that were said to use it. He – or rather, they – claimed it was 3600 years old.

- Modern Mayan shamans continue to use skulls in their rituals and it is known that some travellers in Central America in the 1940s were offered crystal skulls for sale, as the money received for one would have been able to feed the villages for one if not more years. Being explorers, of course, they never had sufficient funds for such purchases – or refused, out of principle.

- Mitchell-Hedges stated he would never reveal how he got the skull, but in a novel, “The White Tiger”, published in 1931, he did speak about “crystal heads”. The main character of his novel – a British expatriate, like himself – was shown the treasure of Montezuma, the last Aztec king, who was disposed by the invading Spanish troops. The treasure was said to contain such “crystal heads”.

Bill Homann is the current caretaker of the Mitchell-Hedges Crystal Skull. He inherited the skull from Anna “Sammy” Mitchell-Hedges, the adopted daughter of F.A. “Mike” Mitchell-Hedges.
Mr. Homann is one of the speakers at the Histories & Mysteries Conference, amongst other leading explorers and researchers, such as Sam Osmanagich (Bosnian Pyramids) and Eileen Hall, daughter of Stanley Hall, a Scottish explorer who organised a daring expedition in 1976 to the so-called Tayos Cave, in the remote jungles of Ecuador. The expedition itself was sponsored by the British and Ecuadorian Army and Neil Armstrong, the first man to set foot on the Moon, was its most high-profile participant.
Philip Coppens, co-organiser of the conference, states: “All of these speakers have one thing in common: they all have a goal, and have sacrificed everything in their life to attain or validate it. It is that ‘stuff’ that also makes Indiana Jones into the screen idol that he is.”

The skull will feature three times during the weekend, all at The Hub, in the very heart of Edinburgh. During the conference (Saturday, November 22, 10h00-18h00), Bill Homann will give a presentation on its history, as well as the theory and legends that exist about this object. On Saturday evening, there will be two sessions (19h30 & 21h00) of a sound and light show, focusing on the Mitchell-Hedges skull. Finally, on Sunday, November 23 (9h30-17h00), the skull will go on public display. It is the first time ever that the skull will go on public display in the UK. Cris Winter, co-organiser of the event, explains: “The skull is a unique artefact. Some people merely want to see it, experience it, and by putting it on public display, we provide this opportunity to each and all. But it is clear that others want to know more, and therefore we have provided other types of experiencing the skull too.”
The organisers are happy that it is the Scottish capital of Edinburgh that has been chosen as the first venue in the United Kingdom to host the skull. “Edinburgh has a magical quality to it. And The Hub truly is the centre of this vibrant city. That we have the opportunity to put this artefact on display here, is therefore a truly wonderful opportunity, and we hope that everyone will use the opportunity to come and see the so-called ‘Skull of Doom’.”

For more information on the conference, please visit: http://www.histories-mysteries.com.