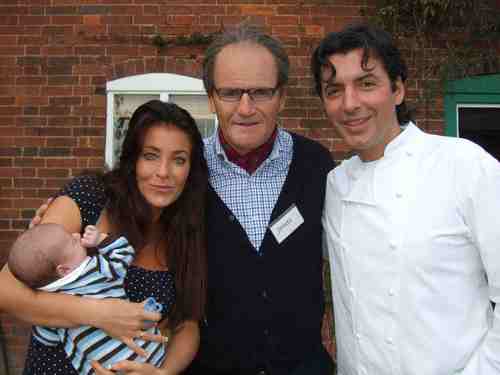 There can be few things more disconcerting for a celebrity chef than finding an unexpected student on your cookery class!

Especially when that student turns out to be none other than Gordon Ramsay - disguised as an elderly man - and the unwitting teacher turns out to be fellow celebrity chef Jean Christophe Novelli or Delia Smith.

TV viewers of Channel 4’s ‘Gordon’s Cookalong’ were treated last Friday night to the sight of Ramsay trying to infiltrate one of Novelli’s cookery classes at his award-winning Novelli Academy, at Crouchmoor Farm, Tea Green, Bedfordshire and subsequently one of Delia’s at Norwich Football Club.

Delia, 67, was completely taken in by Ramsay’s disguise as an elderly gentleman, and was filmed happily chatting to him blissfully unaware of his real identity as she autographed one of her cookery books for him, but it took Novelli less than five seconds to rumble Ramsay’s disguise.

Arriving to meet his students for the day, Novelli, 47, initially shook Gordon’s hand but within a few seconds was shown standing in front of him quizzically staring at his new student saying: “I know you …… You are Gordon ……… What the f*** are you doing here?!” Then, amusingly but perhaps less flatteringly “I can smell you!”

Ramsay, who had enrolled on the day-long course under the false name of Mr. James Winter, was rumbled by Jean Christophe just after 10.30am during the ‘meet and greet’ morning coffee session prior to the class.

Prior to Ramsay’s ejection, the pair were pictured laughing and joking over the incident, with Novelli saying to the cameras “He says he is an old man but he has legs like a gladiator!”

But Novelli refused to let his old friend attend the course, sacking him and his camera crew on the spot, in order to attend to his students. Speaking at the gates to Crouchmoor Farm as he left, Ramsay said “The nation’s favourite French chef sniffed me out in seconds. I’m gutted.” Prior to leaving he posed for a photograph outside Novelli Academy with Jean Christophe, his fiancée Michelle and their new baby boy Jean.

Novelli who has likened his heightened sense of smell to that of his ten dogs said it did not take him long to recognize Gordon, despite the elaborate disguise! “I could smell him … I recognized Gordon’s smell,” he said. “I sniffed him out like a truffle!” He has said in the past that when you do not have a formal education, you rely on your senses, and it seems that on this occasion Novelli’s senses prevailed over Delia’s!

To book a cookery class at Novelli Academy and see full details of the forthcoming autumn, winter and Christmas cookery courses which Gordon Ramsay tried to gatecrash, log on to www.jeanchristophenovelli.com or call 01582-454070.

PRESS: For further information or to arrange an interview with Jean-Christophe on Novelli Academy &/or his recent encounter with Ramsay, please contact Alison at twentyfoursevenpr@gmail.com or mobile 07988023940 or contact Suzanna at Novelli Academy on 01582-454070. Photos of Novelli Academy, JC and guest chefs available.

Novelli Academy has been voted one of the top cookery schools in the world, and is located close to Luton Airport in Bedfordshire. Courses range from £150-1000 per person per day and cover different styles of cuisine from Novelli’s own modern European and French to homestyle Indian curry classes from TV guest chef Manju Malhi and mouthwatering courses from other prominent resident and guest chefs such as Steven Kitchen. Novelli teaches at or appears at many of the classes himself.

The courses, which include lunch, wines and refreshments throughout the day make a fun social day out or a novel Christmas gift or outing for friends or colleagues, whatever the level of culinary ability. Classes can take groups of up to fourteen. The full schedule of dates and classes is on the website at www.jeanchristophenovelli.com

Forthcoming winter and Christmas classes include ‘CHRISTMAS IS COMING’, a ‘DICKENSIAN SPECIAL' and ‘JOYEUX NOEL’, as well as warming winter cookery including game and game sausage making classes, which are particularly popular with men, as are the curry classes and Novelli’s own Intensive Masterclass course.

There has been such a significant increase in the number of men attending Novelli Academy courses that the courses now run at 50/50 male to female ratio and in some cases are predominantly men! For example, one of Jean Christophe's recent Masterclasses was comprised of 80% men. Sadly for him, Gordon Ramsay was not one of them!