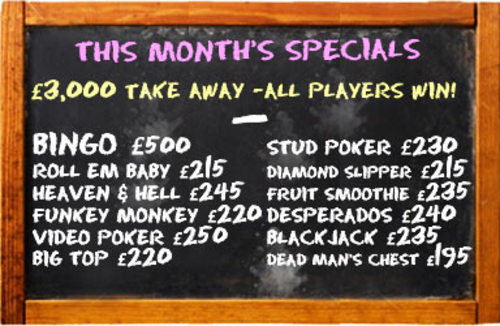 Chit Chat Bingo is serving up a delicious monthly special with the first ever online 'Takeaway' bingo promotion where all players will win a portion of a tasty £3,000 gourmet prize.

This November, the friendly team behind Chit Chat Bingo, which was launched at www.ChitChatBingo.co.uk in January 2006, has laid out a unique bingo promotion where all players are guaranteed to win. Each player who plays any of the 12 favourite games including bingo, slots and casino, will win a wedge of £3,000. Players can even multiply their win amount by playing across several days.

The promotion is available to both existing and new Chit Chat Bingo players and while the players are enjoying a plateful of the £3,000 Takeaway, they also have a chance of winning the Giant Jackpot, the biggest regularly paying bingo jackpot on the net. The jackpot currently stands at £24,000.

Chit Chat Bingo, which hosts one of the largest online bingo communities in the UK, welcomes all new players with a free £1 upon registration - that's 10 free games - and also matches new players' first deposit up to £125. All players with money on their account also get a free daily scratch card with a guaranteed cash prize up to £100.

Chit Chat Bingo's motto is 'My Kind of People' and that is exactly what the site delivers across everything they do, from the people player's chat to and play bingo with, through to the services and support provided to customers. Chit Chat Bingo welcomes all players to the friendliest online bingo community!