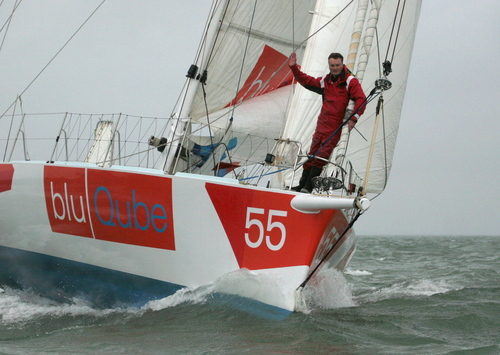 Bristol, UK, 6th November 2008 - bluQube, a leading vendor of financial software is proud to be sponsoring Steve White, who is to compete in this year’s Vendee Globe which starts on 9th November. The 27,000 mile solo around-the-world yacht race is expected to take the winner around 90 days to complete.

CEO Simon Kearsley, whose company bluQube has provided financial support for Steve over the last two years commented, “We are delighted that Steve is finally able to achieve his dream of taking part in the Vendee Globe. His determination, single-mindedness and ‘never say die’ attitude has finally paid off and we wish him the best of luck in his quest. Both our staff and customers have been avidly following Steve’s progress for some time and will be looking forward to tracking how he does in what is one of the World’s most revered yet treacherous races. All of us at bluQube wish Steve the very best of luck in the arduous months that lie ahead.”

Steve White managed to secure the last minute additional funding he needed to enter the race from a consortium of private backers who have requested that Steve’s boat is named after registered charity ‘Toe in the Water’ which helps injured servicemen and women, to use competitive sailing as a means of inspiration and rehabilitation. The charitable organisation was co-founded in June 2008 by Captain Holly King RAMC, a physiotherapist from Headley Court (the Defence Medical Rehabilitation Centre) and Tanya Brookfield.

‘Toe in the Water’ will compete alongside other British sponsored entries including, Aviva, Artemis and Ecover.

Simon Kearsley at bluQube, a keen sailor himself will be seeing Steve off at the start-line at the Vendee port of Les Sables-d'Olonne.

Thirty yachts will compete in the race which starts from the Vendee. The route is a non-stop, circumnavigation of the globe along the old clipper route. It follows the Atlantic Ocean to the Cape of Good Hope; then clockwise around Antarctica keeping Cape Leeuwin and Cape Horn to port and then finally back to Sables d’Olonne.

According to Steve White it will take most skippers between 90-100 days to complete, and due to the extreme conditions many will be forced to drop out along the way. Over the next week Steve and his team will be making the final preparations to the boat including new sails, rigging and paintjob. Steve commented, “This really does not compare with any events I’ve done before because this has been my ultimate goal for the last ten and a half years. I think for the first week of the race I should be able to live on pure adrenalin alone. It has been fairly stressful the couple of weeks, but you have to relax and believe it will all come right in the end.“