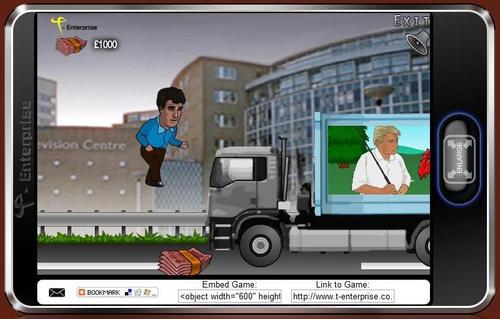 Screenshots of the game are available on request

Truckers are getting their revenge on Jeremy Clarkson for his remarks about them murdering prostitutes, by running him over in a new computer game.

Run Clarkson Run has been built in just 24 hours and released free on the internet, by Glasgow games development company T-Enterprise.

You can play it free at www.t-enterprise.co.uk/runclarksonrun.

In the game, you control a little animated Clarkson being chased by lorries driven by angry truckers.

You must jump over the lorries and grab the piles of TV licence payers’ cash.

But get your timing wrong – and SPLAT, no more Clarkson.

“So we figured we’d give truckers the chance for revenge. And not just truckers; the whole family can spend hours playing the game, running over and killing Jeremy Clarkson just for fun!”

Clarkson hit the headlines earlier this week after making the remarks on TV show Top Gear.

T-Enterprise employs six people and works with businesses across the UK.

In the last few months it has captured a clutch of headlines across the globe for its weekly games.

In another, players had to help George Bush in a shoot out with Congress to get his bank bail-out billions.

You can sign up for the free games for yourself at www.t-enterprise.co.uk/corporate-technology/fab-newsletter.a....


NOTES TO EDITORS
• For any further information please contact Paul Green at Publicity Heaven PR agency on 08452 303049 or email press@publicityheaven.com
• A company factfile and images are available at www.t-enterprise.co.uk/press
• Screen shots are available