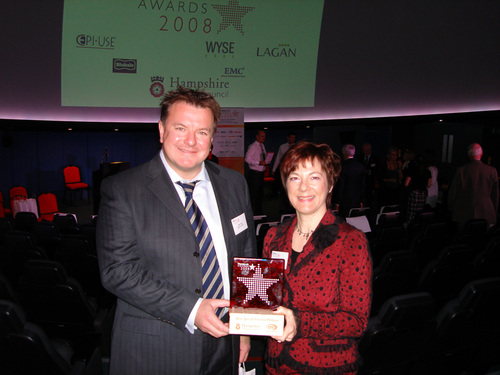 Growing Ambitions in an online broker of volunteer career speakers from over 800 different careers into education. It covers every town in the UK - England, Scotland, Wales and Northern Ireland, but has its main office base in Portsmouth, Hampshire.

The HantsWeb Awards reward the best websites in Hampshire and the Isle of Wight and are run by Hampshire County Council. This year’s awards were sponsored by Wave105 FM, Dell, the Daily Echo, Unisys and other top local and national organisations.

Growing Ambitions was praised for its user friendliness, straightforward and informative content, and for its objectives - gettting the county - and the UK - volunteering to benefit young people.

Nominated websites went through a three-stage selection procedure: shortlisting to 10 sites; then from 10 down to 3 finalists. From these three the winner was selected.

Ken Thornber, Leader of Hampshire County Council said “Winners and runners-up should be extremely proud of their hard work and dedication to creating accessible, innovative and user friendly online services..[..]"

This is the sixth year of the Awards which this time attracted 1,116 nominations - the highest level to date.