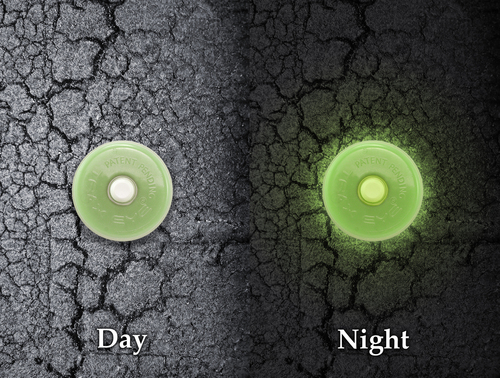 A SHROPSHIRE company believes it could have the answer to safety fears raised by Powys County Council’s decision to turn off more than 9,000 street lights to save cash wich may set a trend throughout UK.

Council chiefs are turning off two out of three lights in non-core residential areas after it was revealed the authority’s £500,000 lighting bill was set to rise by £175,000.

But Grant Taylor, managing director of GIBS 2000 Limited and inventor of traxeyes, believes his innovative glowing light system called Traxeyes could be the answer: “It’s ironic that cars and road users get multi million investments on road safety and pedestrians and cyclists get nothing.”

Traxeyes are photo luminescent discs which can be placed on roadsides, pathways, to guide walkers and cyclists safely around unlit areas.
The discs have a glow cycle of around 12 hours after only an eight minute exposure to natural light, meaning they are more efficient than solar power and do not require batteries. And best of all they only cost £3 each!and only need a hammer to fit.

They are already being used by English Heritage as part of an ongoing safety programme at the Berwick-upon-Tweed Ramparts to highlight the edge of a pathway alongside the ramparts at night.

Mr Taylor originally designed the system to light the waterways canalside in Birmingham but believes they could be vital for areas of Mid Wales and the rest of the UK which could be left in the dark without any thought of health and safety concerns over the duty of care to pedestrians and cyclists.

“Traxeyes are an inexpensive way of making sure that these areas are safe for people who do want to be out and about in the dark, and not imprisoned in their homes because the streetlights have been turned off.”