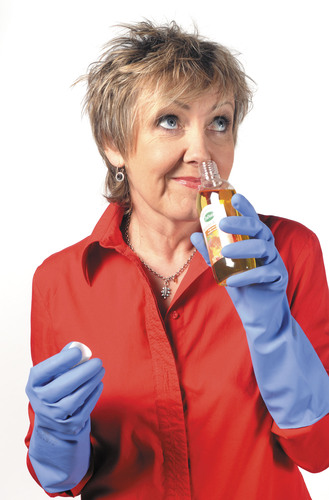 Two thirds of mums feel they are letting their family down if the house is untidy and a staggering three quarters NEVER feel on top of the housework according to a new survey of 4,000 women by household disinfectant Zoflora.

Half of those surveyed don’t think their house is as clean as their mum’s is and only one in five believe they spend as much time cleaning as their mum did when they were kids. One in six say their Mum is regularly critical about the tidiness of their house.

Nearly 80 per cent said they would be embarrassed if someone came round and they hadn’t had the chance to tidy first. Two thirds blame a lack of time as the main reason they struggle to keep up with the housework and 45% said they feel their house is permanently untidy. A frustrated 60% felt that as soon as the house is tidy it gets messed up again and 32% believe it is impossible to have a clean house with children around.

The survey reveals the top ten cleaning short-cuts are:

1. Hiding clutter in drawers/cupboards
2. Shutting doors to messy rooms
3. Wiping around objects on the kitchen surface
4. Dumping things in the loft/spare room/garage
5. Putting things under the bed
6. Brushing crumbs on to the floor
7. Throwing things out rather than filing/storing
8. Eating straight from the tin/box to avoid washing up
9. Hiding a stain by putting something over it (such as a plant pot)
10. Spraying air fresheners, in the hope that the pleasant smell will mask or overpower any nasty odours, without having to tackle the cause

Aggie MacKenzie explains: “Long working hours and busy social lives mean we simply don’t have as much time to keep on top of housework as we’d like. That’s why I’m supporting Zoflora’s ‘Clean Smarter, Not Harder’, helping people clean more cleverly and efficiently while remaining confident if unexpected guests arrive at your door.”

For more information, go to www.cleansmarternotharder.co.uk.

Zoflora concentrated household disinfectant has been disinfecting British homes for 80 years. Available in thirteen floral fragrances, it kills bacteria and neutralises odour as well as leaving a long-lasting, fresh scent throughout the home.