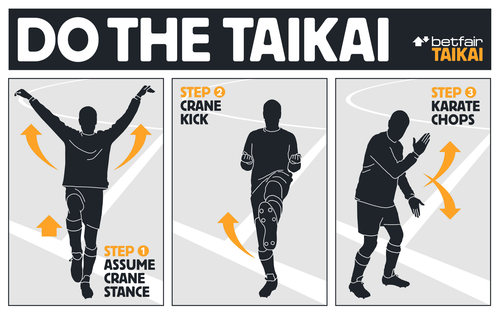 Forget Ravanelli’s shirt over the head, the Klinsmann dive and Crouch’s ‘robot’ dance, there’s a new footballing-craze about to hit the UK. The race is on for Premier League stars to claim a five-figure payment for performing the world’s first commercial goal celebration.

Betfair, the UK’s biggest online betting company, has put up the unique prize to publicise the launch of TaiKai, its new football prediction game, which is a cross between the office sweepstake and the traditional wager. The first Premier League footballer to DO THE TAIKAI, a martial arts inspired dance move that reflects the Far Eastern origin of the product’s name, will instantly be awarded the £10,000 prize for a charity of their choice and have the kudos of kicking off the latest goal celebration mania.

Every Premier League footballer, agent and club has been sent a step-by-step guide to DO THE TAIKAI, a simple celebration choreographed by Cascade Dance, a leading London dance studio. It begins with the Crane position - made famous in the Karate Kid movies - and finishes with a series of karate chops to spell out the T and K of TaiKai.

Andy Lulham of Betfair said: “There have been some great spontaneous goal celebrations in the past, but we’re hoping the financial incentive we’ve put up for the first player to DO THE TAIKAI will help us secure the world’s first in-game advert. We’ve already had reports of players practicing the moves in training so we’re pretty confident someone will take us up on the offer – all they need to do now is hit the back of the net and start dancing.”

For more information, images and step-by-step guide to DO THE TAIKAI please visit www.dothetaikai.com or contact Mischief PR on 020 7100 9999 / betfair@mischiefpr.com

Betfair is the world’s biggest online betting community and pioneered the first successful betting exchange in 2000. Driven by cutting-edge technology, Betfair enables customers to choose their own odds and bet even after the event has started. The company now processes 5 million transactions a day from its 2 million registered customers. In addition to sports betting, Betfair offers a portfolio of innovative products including casino, exchange games and poker.

Betfair has twice been named the UK’s ‘Company of the Year’ at the Confederation of British Industry’s Emerging Business Awards and remains one of the only betting companies to win a Queen’s Award for Enterprise, being recognised for Innovation in 2003 and most recently for International Trade in 2008.

Betfair currently employs over 1,350 people, principally in London, Malta and Tasmania. The company is a licensed betting operator in the UK, and holds licenses in Australia, Germany, Austria, Italy and Malta.

Launched in the summer of 2008, TaiKai is the most recent addition to Betfair’s portfolio of products. TaiKai is an online sports prediction game that enables friends and others to predict the outcome of sporting events and compete for fun or real money. It's the ultimate game for players to prove their opinions.