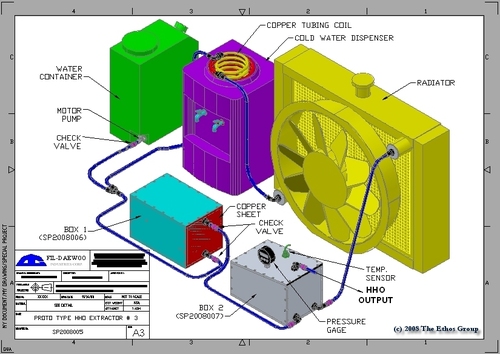 When ETHOS CEO Peter Aldred first announced his latest goal earlier this year; "To produce and drive the first water-powered car in Europe" the skeptics thought he had gone crazy. But it is now looking like they might have to eat their words as here are the designs for the new ETHOS HHO Extraction Unit which have been produced in association with DAEWOO Cars.

The first prototype is scheduled to be finished by the end of 2008 and, following the successful trials that they envisage, will then move forward into full scale mass-production in the first quarter of 2009. This new method of disassociating the covalent bonds of the hydrogen and oxygen water molecules is the brain child of a 22 year old genius, whose identity is being withheld for his own personal safety as there is mass opposition to free energy technologies that have been suppressed over many decades and previous inventors threatened and killed.

Even Peter Aldred himself has been facing far more than his usual fair share of challenges since embarking on this new free energy mission in March of this year; culminating on the 21st November 2008 when he was deported and banned from his home in Turkey where he lived and worked on running his ETHOS business.

We managed to get to speak with Peter, who is now laying low in Eastern Europe while the prototype is completed; "Free energy has been with us for many years, it is just that we have never before been allowed to use it. If you look back at our previous press releases you will see that at the start of this new mission I visited Daniel Dingle in the Philippines and drove the water powered car he first invented in 1968! So, 30 years ago we all could have had cars that ran on water - so why now, 30 years later, do we still not yet have them? The technology was there then and, with the advent of new technologies, even more efficient ways of disassociating water molecules have now been discovered. I will drive the first car in Europe powered by nothing else but water..."

Peter also went on to tell us that, following the success of their new PD Ease for Parkinson's Disease sufferers (www.pdease.com), they also have a project which is very close to a cure for Alzheimer's Disease and are just about to start clinical trials to prove its efficacy as well.

We then spoke to Daniel Smith, the ETHOS GCO who is in charge of coordinating this project; "My involvement in the project has certainly made an impact, being able to concentrate on all the minutia which has resulted in all the excitement and buzz of seeing the fruition of all these months of dedicated focus, finally resulting in what you are seeing today. It has been a real concerted team effort on all fronts and, even though we have seen some devastating lows in the project, it is the highs like today which have always been the goal to reach, which is to provide alternative free energy. Nothing brings me greater pleasure, or makes me more proud than I am today; to bring you the very exciting news on such a device as the ethos:energies HydroGenX Unit."