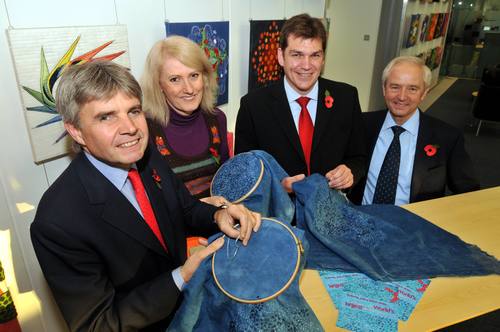 In the three weeks since its launch over 2000 stitches have already been contributed to what will be ' The World's Largest Diffraction Pattern' - a 3m x 3m squared piece of textile embroidery depicting an important new diffraction pattern discovered by Scientists from Evotec working atDiamondLight Source. This pattern may help unlock new types of treatment for neuro-degenerative diseases such as Alzheimer's.

The project led by two dynamic women is widening knowledge of both science and embroidery by getting people who often think they can't stitch, to do just that and at the same time getting them to engage in the science behind the project. The diffraction piece received its initials stitches from the Science Minister, Lord Drayson and many Diamond Diamond staff. It was then taken to visit to the Paris City of Science Exhibition where the British Ambassador and his wife, Sir Peter and Lady Westmacott added their stitches along with over 1500 French visitors. Over the next few weeks the pattern will be on display at Diamond and at various public places around Oxfordshire for the public to add their stitches . It will also travel to Chicago where the annual American Association for the Advancement of Science will hold their annual meeting in February and, finally, its unveiling will take place in London at the World Conference of Science Journalists next June.

The project was the inspiration of Diamond Head of Communications, Isabelle Boscaro-Clarke who is passionate about getting people to look with fresh eyes at all things scientific. Equally passionate about stitching, the artist chosen to direct the project is leading textile artist, Anne Griffiths. Based in Oxfordshire, she has spent the past year as an Artist in Residence at Diamond Light Source exploring the diversity of science carried out at Diamond. One of the resulting delicate but durable artworks she has produced uses iron filings to reflect how 'iron' is the connection between a variety of beamline research projects conducted at the facility. She also helped create the very successful 'Designs Life Project' with Diamond bringing together over 2000 members of the WI to create 30 beautiful wall panels in textile and embroidery art depicting some of the viruses and cells that could be researched at Diamond. Scientists working at Diamond Light Source were able to inspire the project by talking about their structural biology experiments and the beautiful images that are created as part of the process.

Below is the original release FYI, a photo showing textile artist, Anne Griffiths with the Science Minister at Diamond - the caption for this picture would be Left to right: (Lord Drayson, UK Science Minister, Anne Griffiths, Dr John Barker, Group Leader at Evotec and Prof. Gerd Materlik, CEO of Diamond with the soon-to-be world's largest diffraction pattern, at Diamond Light Source)

During a visit to Diamond Light Source on Friday 7th November, Lord Drayson, the new Science Minister, launched the World’s largest diffraction pattern project by contributing a silver stitch to what will become the world’s largest diffraction pattern. The project, which will involve over 5000 people adding their stitches, has been created to provide a platform for scientists to explain their research to the public in an engaging and imaginative way.

Diffraction patterns are obtained by biomedical researchers during their experiments at Diamond and lead to a 3-D representation of the structure of a specific biological target, which can be used to help design cures for specific diseases. The diffraction pattern being created in the art and craft piece is that of a target called serine racemase, which is an important target in the fight against pain and neurodegenerative disorders such as Alzheimer’s disease. It is one of the first ever collected for this specific biological target. The research was carried out by scientists from the Oxfordshire-based subsidiary of the pioneering biopharmaceutical company, Evotec. The company undertakes regular research at Diamond and is kindly supporting this initiative.

Lord Drayson was delighted to contribute to project, he said: “I am pleased to be taking part in this thought provoking project, which will give members of the public an opportunity to appreciate the wide range of science taking place at Diamond. Over the next decades, Diamond will play a vital role to engage the young and the old in the exciting contribution science is making to society and will inspire the next generation of scientists and engineers in the same way that cool projects in the 70s and 80s inspired me.”

Anne Griffiths, a textile artist leading the project, is keen to start collecting more stitches, she says: “Having been involved with Diamond Light Source for several years I am delighted to be able to continue the relationship through this project. It is wonderful to be able to bring science and art together in this way and I am looking forward to gathering all the stitches from lots of different people over the next few months to help create the world’s largest diffraction pattern and to understand more about the science behind the art.”

Dr John Barker, Group Leader of X-ray crystallography at Evotec, and his team achieved the featured diffraction pattern during beamtime at Diamond earlier this year. He says: “The information we gain from these diffraction patterns is vital to the progression of our research into serious diseases such as Alzheimer’s, and Parkinson’s and pain relief. It is fantastic that one of our diffraction patterns is now being used to create a unique work of art whilst at the same time widening access to science. Evotec is very pleased to be supporting Diamond Light Source in this initiative and we are looking forward to seeing it on display.”

The World’s largest diffraction pattern will receive stitches from far and wide as the project will be taken to Paris next week for its celebrations as European City of Science and to Chicago for the American Association for the Advancement of Science (AAAS) meeting in February 2009.

Members of the public who are interested in sewing a stitch and finding out more about the dialogue project should visit www.diamond.ac.uk or email us at diamondcomms@diamond.ac.uk.

· Many of our everyday commodities that we take for granted, from food manufacturing to cosmetics, from revolutionary drugs to surgical tools, from computers to mobile phones, have all been developed or improved using synchrotron light.

· Diamond will bring benefits to:

- Biology and medicine. For example, the fight against illnesses such as Parkinson's, Alzheimer's, osteoporosis and many cancers will benefit from the new research techniques available at Diamond.

- The physical and chemical sciences. For example, in the near future, engineers will be able to image their structure down to an atomic scale, helping them to understand the way impurities and defects behave and how they can be controlled.

- The Environmental and Earth sciences. For example, Diamond will help researchers to identify organisms that target specific types of contaminant in the environment which can potentially lead to identifying cheap and effective ways for cleaning polluted land.

Evotec is a leader in the discovery and development of novel small molecule drugs. Both through its own discovery programs and through research collaborations, it is generating the highest quality research results to its partners in the pharmaceutical and biotechnology industries. In proprietary projects, Evotec specializes in finding new treatments for diseases of the Central Nervous System and has four programs in clinical development. Additionally, Evotec has established a powerful drug discovery platform that is applicable to biological targets across all therapeutic areas. It uses pioneering approaches and technologies such as structure-based drug design using the Diamond Light Source in its collaborative and proprietary research. Evotec is a regular user of Diamond and is supporting this science and art initiative.