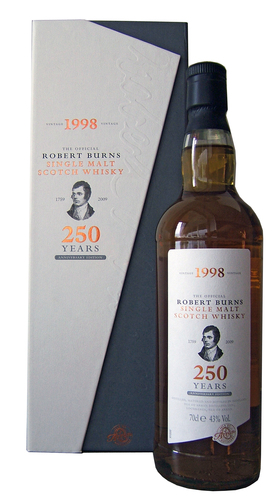 Burns Night – traditionally celebrated on 25th January – will be the 250th anniversary of the birth of Scotland’s national poet in 2009. To celebrate, award-winning whisky producer, Isle of Arran Distillers, has released a limited edition bottling of its Single Malt - 250th Anniversary Robert Burns Malt. Fifteen ex-Sherry casks were selected from the 1998 distillation by Distillery Manager, James MacTaggart, for the bottling, with just 1,800 bottles available in the UK.

The Isle of Arran Distillery is one of the last remaining independent distilleries in Scotland and is the only Distillery on the island of Arran. The distillery only uses traditional methods, with wooden washbacks and bespoke copper stills.
The only whisky entitled to the Burns name, Isle of Arran 250th Anniversary Robert Burns Malt is available at good whisky specialists, thedrinkshop.com and drinkon.com and retails at £49.99. Isle of Arran Distillers also produces the Robert Burns Blend & Malt which are available at £14.99 and £22.99, respectively.

This press release was distributed by ResponseSource Press Release Wire on behalf of Relish PR in the following categories: Food & Drink, for more information visit https://pressreleasewire.responsesource.com/about.