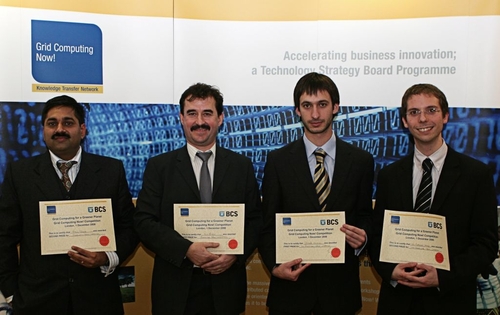 * Grid Computing Now! names Nick Pringle and Christos Melissidis winners of the “Grid computing for a Greener Planet” competition
* Winning entries detailed how to use grid computing to improve traffic flow and produce a simulation of our ecosystem
* The competition was supported by Microsoft, Intellect, The British Computer Society (BCS), The 451 Group, Memset, the National e-Science Centre (NeSC), Oxford e-Research Centre (OeRC), WWF, and The Technology Strategy Board
* Prizes included a Sony Vaio laptop, the appointment of a mentor to enable the winner to take their idea forward, an Xbox360 Elite and subscription to the British Computer Society (BCS) and The 451 Group
* Second prizes were awarded for a solution that would locate carbon hot spots, and one that would monitor methane levels

The first prize for the Non-Professional Track was awarded to Christos Melissidis, an MSc student from Cranfield University. His concept is a simulation of our ecosystem. Melissidis wants to create a virtual ecosystem in order to solve environmental problems. The idea is to feed real time data derived from various data sources, such as the weather channel, into the virtual ecosystem while measuring its response.

The first prize for the Professional Track was awarded to Nick Pringle, an IT consultant and part-time PhD student from Glamorgan University, for his predictive traffic flow model. His solution would involve enhancing existing GPS information by submitting individual route information to a grid computing system, which would calculate a journey time based on how many other people would be choosing to take the same route at the same time. This has the potential to reduce time spent in traffic jams and carbon emissions.

Entrants were judged primarily on their solution’s feasibility, scope and creativity. Grid computing, a service for sharing computer power and data storage capacity over the Internet*, can be applied to any environmental issue that stands to benefit from a huge amount of raw processing power to calculate massive data sets.

Both entrants have been appointed a mentor, Dr David Wallom, Technical Manager University of Oxford, to help them progress their ideas.

Ian Osborne, Grid Computing Now! Director said, “Over the past year we have seen tremendous growth in the number and scope of grid computing solutions available. The winners of this competition have demonstrated the immense potential for grid computing to help solve, or monitor environmental issues.”

Bob Harvey, Chair of the BCS Carbon Footprint Working Group, says “I am delighted to see students and professionals involved in this competition and producing solutions that offer real benefits, especially in terms of reducing carbon emissions.”

Jerry Fishenden, National Technology Officer UK, Microsoft, says “Technology is all too often spoken about only in narrow and negative terms when it comes to the environment, with people focused on reducing its contribution to carbon emissions. But we need to ensure that we don't lose sight of the bigger objective, which is how technology can enable us to rethink the way we learn, live work and play in fundamental and radical ways. And that is the real lesson of this competition: how technology can indeed help us find a way of producing a greener planet.”

The first grid computing competition, launched in 2006, invited participants to solve any type of problem. Entries ranged from using grid computing for asteroid tracking intelligence to exploiting the Internet to help combat terrorism. The previous winner, Gokop Goteng, proposed the use of grid’s processing power to crunch real time CCTV footage and biometric data to identify potential high-risk incidents. After winning the competition he went on to present his solution at Microsoft's Annual European Research and Innovation Day in Brussels.

Nick Pringle has won a free one year BCS membership; a mentor who will enable him to take his idea from the competition forward; a week long apprenticeship/internship at the National e-Science Centre at the University of Edinburgh, a Sony Vaio laptop; a one year limited subscription to 451 Group’s EcoEfficient and Grid Services publication.

Christos Melissidis has won a free one year BCS membership; a mentor who will enable him to take his idea from the competition forward; a week long apprenticeship/internship at the National e-Science Centre at the University of Edinburgh, where he will be introduced to key academics working on grid computing; an Xbox 360 Elite; a one year limited subscription to the 451 Group’s EcoEfficient and Grid Services Publication.

Grid Computing Now! is a Knowledge Transfer Network funded by the Technology Strategy Board that began in February 2005 with the aim to accelerate the adoption of grid computing in the public and private sector. With over 1000 members registered on our website, Grid Computing Now! raises awareness, provides background education and connects prospective users with experts and suppliers to promote business orientated, efficient and sustainable computing infrastructures. www.gridcomputingnow.org

The British Computer Society (BCS) is the Chartered industry body for IT professionals, the Chartered Engineering Institution for Information Technology and a Chartered Science Institution. With our rapidly growing membership, BCS is playing an increasingly pivotal role in leading the development and implementation of world class standards for the IT profession through innovative products, services and support.

Through our specific “Professionalism in IT” programme, BCS is leading and building IT professionalism to levels which are currently only seen in more traditional long standing professions such as law, medicine, and accountancy but which will increasingly become the de facto standards for IT professionals. www.bcs.org

Founded in 1975, Microsoft (Nasdaq “MSFT”) is the worldwide leader in software, services and solutions that help people and businesses realize their full potential.

Intellect is the UK trade association for the IT, telecoms and electronics industries. Its members account for over 80% of these markets and include blue-chip multinationals as well as early stage technology companies. These industries together generate around 10% of UK GDP and 15% of UK trade. For more information go to www.intellectuk.org

This press release was distributed by ResponseSource Press Release Wire on behalf of The Hoffman Agency (Europe) in the following categories: Computing & Telecoms, for more information visit https://pressreleasewire.responsesource.com/about.