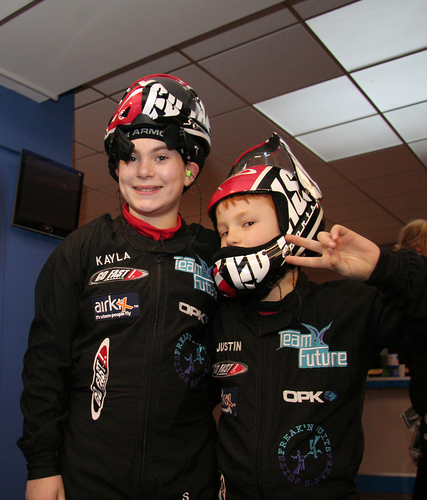 In April 2009 two exceptional children will be travelling to the UK. Justin and Kayla Tinnucci are not just professional athletes, but their chosen sport is most definitely not for the feint hearted: Indoor skydiving.

The pair are travelling all the way from Colorado to Bedfordshire to compete in one of the biggest competitions in the international skydiving calendar: the Bodyflight World Challenge.

Bodyflight is an indoor skydiving wind tunnel. A converted MOD research facility, the tunnel was made famous after scenes for the latest James Bond movie were filmed in the flight chamber back in February.

Wind speeds of up to 180mph are generated in the 16.5ft diameter flight chamber, simulating the freefall element of a skydive.

Every year the Bodyflight World Challenge attracts hundreds of the top skydivers from all over the globe to compete for the massive cash prizes.

Team Future, as Justin and Kayla are known, competed in the 2008 competition and enjoyed it so much they made it their aim to come back and try for a medal.

8 year old Justin Tinnucci said after the 2008 event: “We had so much fun, it was our first time in this tunnel and it was a really good competition. We can’t wait to come back next year.” The competition is not the only thing Justin is waiting for, he is counting down the days before he turns 18 and so can jump out of a plane for real.

The pairs mother Jennifer Tinnucci said “The kids are really looking forward to the trip to the World Challenge in 2009. They have been training hard for the event and have improved their skills since the 2008 competition. In 2009, they hope to be real contenders for medals in both the 2 way pro FreeFly category and in the AA 4 way formation skydiving events.”

The pair will face some stiff competition the competition attracts top skydivers from all over the world including current World Champions Team Babylon who will be hoping to claim the gold medals and 1st prize of £5000.

Event organiser Bryony Doughty said “This is the 4th year of the World Challenge and it is going to be much bigger than previous years. The number of teams grows each year, as does the standard of flying. It’s such a pleasure to see young flyers like Team future competing at a world class level, they really are the future of the sport!”

The competition is on the 4th and 5th of April 2009. More information can be found on the Bodyflight website: www.bodyflight.co.uk