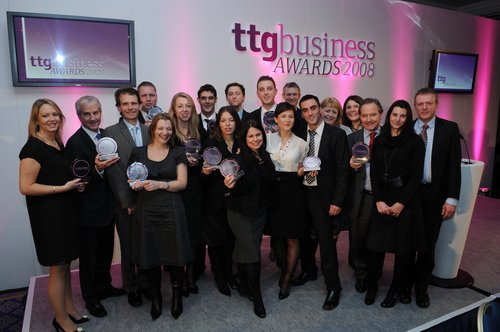 This year’s awards attracted the highest number of entries, as well as the highest quality of the entries, ever. The ttgbusiness Industry Report reveals that despite the inevitable downturn in sectors such as banking and finance, the amount of business travel booked by agents in the last 12 months has actually increased, proving to be an encouraging tone throughout the awards.

“This year’s ttgbusiness Awards proved once again that despite the current economic climate, success must be celebrated. With the highest number of entries – and the highest standards – this year’s winners can be justifiably proud. Companies are only great thanks to the people working within them, and that’s what the ttgbusiness Awards are all about – recognising individual talent and rewarding it.

“Times may be tough, but this is when business travel consultants come into their own - as proved by the talent on display at yesterday’s event. The ttgbusiness Awards are the only awards in the industry which recognises the hard work done by individuals and will continue to do so.”

Carlson Wagonlit Travel scored tremendously well, scooping the Young Business Professional, Reservations Team and Travel Management Company of the Year awards, based on the commitment they show to all of their employees.

Another highlight of the Awards was Richard Brown, chief executive of Eurostar, receiving the Contribution to the Industry Award for overseeing the seamless transition to St Pancras, and for his continuous commitment to the environment.

For more detailed information on any of the 12 awards and images, please contact Frankie at Mercieca PR on 020 7485 0100 or email Frankie@mercieca.co.uk

This press release was distributed by ResponseSource Press Release Wire on behalf of Mercieca Ltd in the following categories: Travel, for more information visit https://pressreleasewire.responsesource.com/about.