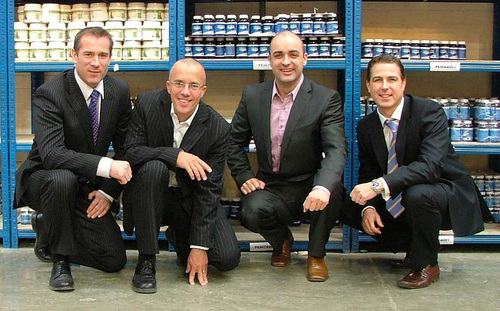 The UK’s leading manufacturer and supplier of online sports nutrition has just announced arguably the fittest SMT in UK business and with experience at companies such as Thomas Cook, British Airways, Rightmove, Renault, Harrods and Next, you could be forgiven for feeling slightly intimidated by the depth of knowledge being brought into the sector.

Since launching sports nutrition company Myprotein.co.uk in 2004 with just £500, Oliver Cookson has won the Institute of Directors ‘Rising Star’ North West Awards in 2008, been a finalist in both the Bank of Scotland National Business Awards Entrepreneur of the Year 2008 and The Credit Suisse Entrepreneur of the Year Award 2008, and also won a CBI Growing Business Award in 2007.

Even in the current climate, the business continues to go from strength to strength with record sales month on month. Revenue for www.Myprotein.co.uk has doubled year on year, with a growing order book of loyal customers who are benefiting from the best pricing anywhere in Europe.

Alex Hunter is a chartered management accountant with an exceptional track record, borne out of being an integral player in the creation of no less than three UK airlines, namely as Finance Director at both Thomas Cook Airlines and Britannia Airways, and Chief Commercial Officer at Thomsonfly.com. Alex has particular expertise in optimising revenue growth and controlling costs through systems and process enhancements in rapid growth businesses.

Mark Coxhead was previously Head of Marketing for Rightmove.co.uk and has held senior positions at Thomson Directories and Renault UK, as well as working extensively across Europe for Honda. His work in developing integrated marketing campaigns at Rightmove resulted in record levels of traffic, making Rightmove one of the UK’s most popular websites. He is confident of doing the same with Myprotein.co.uk’s already burgeoning online profile.

Andy Gibbon came onboard as Myprotein’s Operations Director in April 2008 with a proven background in blue-chip retailing and logistics. From Harrods to Next, Andy has a wealth of experience successfully developing retail operations across the UK. As the National Operations Manager for Habitat, Andy was responsible for their UK store opening programme, as well as launching their electronic gift card.

As well as a huge mutual interest in personal fitness, the SMT share Oliver Cookson’s belief that Myprotein has the right formula to become the biggest sports nutrition supplier in Europe.

Oliver Cookson had the following to say,

“Appointing such an experienced team has ensured that Myprotein.co.uk has the perfect platform from which to drive the business forward even faster. The fact that the team have such a huge interest in fitness, coupled with their wealth of professional experience means that the company is well positioned to continue, and improve on the fantastic growth we have achieved so far. This is truly an exciting time for Myprotein.”

For further information or to arrange an interview with Oliver Cookson, MD of Myprotein.co.uk, please contact Rich Leigh, 10 Yetis Public Relations Agency on 01452 348 211 or rich@10yetis.co.uk.

• Myprotein.co.uk has been featured in the Sunday Times, The Daily Express, The Telegraph, Men’s Health and more.

• Myprotein.co.uk produces the majority of its products in-house and sells direct on the internet to the end user.?