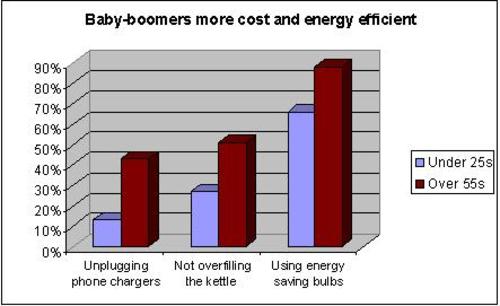 older generations have really embraced the energy saving benefits of modern technology, to an even greater degree than their younger counterparts

Over 55s are 25% more likely to shrink their monthly bills by being energy efficient than the younger generation, according to a new survey from Opus Energy, an independent electricity supplier for UK businesses.

The survey asked over 500 people about the energy saving steps they take both at home and at work. The findings showed that when it comes to tightening belts this Christmas the “baby boomer” generation are steps ahead of younger generations. Having lived through two recessions and grown up in post-war Britain, the over 55s are well versed in making those small steps that add up to real financial savings.

The results showed that the over 55s are well versed at making efficient use of modern technology. In the workplace, the baby boomers are three times more likely than dilligently switch off phone chargers when not in use, with 43% switching of compared to just one in ten (13%) of under 25s making the effort.

The baby-boomers also have the most ‘efficient’ tea breaks at work with more than half the over 55s (55%) taking care not to boil more water than they need each time compared to under a third (27%) of under 25s.

Even though two thirds (66%) of young Brits claim they are switching to energy saving bulbs to help curb costs at home, a staggering nine out of ten (88%) over 55s said they had already made the energy efficient swap.

Under 25s were also more likely to think that making a business or a home energy efficient would increase its running costs. But as the baby boomers are clearly demonstrating, when energy costs are high and belts are tightening, small energy saving steps can be enough to equate to big savings.

“It’s clear that having lived through two recessions, our older generations are more adept at taking steps to save on their energy usage to cut their bills. What is interesting is that the older generations have really embraced the energy saving benefits of modern technology, to an even greater degree than their younger counterparts.

“Technology such as energy saving bulbs can be more expensive in the short term, but over their life time will save you up to £35 in electricity costs. It’s a myth that being more environmentally friendly has to be more expensive. At Opus Energy, we source over half our energy from renewable generators and cleaner, low-carbon sources as standard. This way all the businesses we supply enjoy cleaner energy with minimum fuss and no extra cost.”

Opus Energy is a leading independent supplier of electricity offering tailor-made solutions for the UK SME and corporate markets. Its market-leading innovations are driven by customer needs and the company is committed to helping businesses reduce their carbon footprint through procurement of energy from cleaner sources.

Over the last two years (between April 2006 and March 2008), 62% of the energy supplied by Opus Energy to its customers came from cleaner, low-carbon sources – 54% from renewable generators and 8% from cleaner Combined Heat and Power (CHP) produced by CHP generators. These CHP generators have been awarded accreditation by the regulator, Ofgem, for producing cleaner, more environmentally friendly power.

Opus Energy's management team has a 50 percent stake in the business, while International Power Plc (LSE:IPR.L) holds 30 percent and Telecom Plus Plc (LSE: TEP.L ) has 20 percent. With offices in Northampton and Oxford, it employs 200 people.