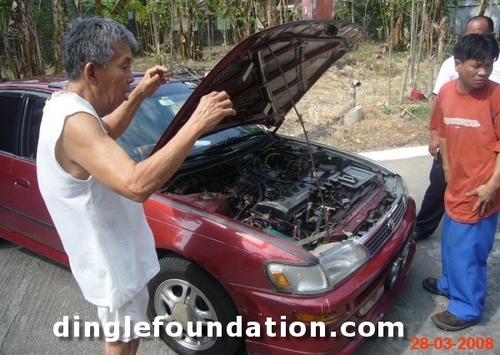 Daniel Dingle, the inventor of the world's first water powered car back in 1968, who Ethos CEO Peter Aldred met back in March of this year to discuss a strategic partner alliance with, has just been sentenced to 20 years in prison.

Peter Aldred commented, "This is very convenient for 'the powers that be' who do not want Daniel's secret to be reviled. But we have already renewed our previous negations and are confident now of a mutually beneficial outcome for all mankind..."

Veteran lawyer Frank Chavez, who was approached by Dingel on Friday, said he would immediately appeal the court decision before it became final on Christmas Eve.

“I am taking up his case and will see to it that his conviction is reversed,” Chavez said. “Mankind will benefit from his invention ... How will we know his secret if we put him behind bars?”

Peter continued, "The most interesting point to this article is the fact that in 2000 a multi-national corporation gave Daniel $410,000.

Do you think that a multi-national corporation of this stature would freely back a project like this without first doing their due diligence that the invention is in fact genuine and far from being a hoax as the powers that be would prefer everyone to believe! I know that I definitely would before parting with $410,000.

The case isn't disputing the fact that the invention works but rather, for whatever reason, that Daniel decided not to proceed with the project with them. Maybe he thought, like he said to me, they were just another group who wanted to steal his invention from him once they discovered the secret of how it actually works for themselves.

Why is it that all water powered car inventors seem to wind up either dead or in prison...? There seems to be a definite pattern immerging here... I will leave you to draw your own conclusions...

As reported by Delfin, I acted as counsel for Mr. Dingel yesterday.

Mr. Dingel has been making constant follow ups on us and as far as Delfin and I are concerned, it is a done deal: Ethos will be the one to distribute and market his inventions anywhere in the world (except the Philippines and South Korea where there is already an exclusive distributor). All that is needed is the contract and your signatures.

Please send us a draft of your Memorandum of Agreements and I will review them as soon as you send them. Once everything is ready, all you and Mr. Dingel need to do is sign them. We would prefer for you to come over and personally sign the contracts.