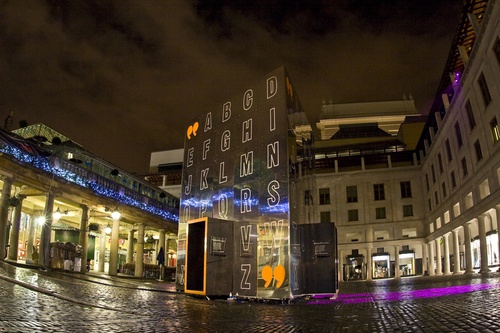 Sex, love, money and the perennial British favourite, better weather, are top of Londoners’ wish-lists for 2009.

This is according to voice-to-text company SpinVox which, since the start of the festive period has been capturing seasonal and New Year wishes at its Wishing Well, a 7.2 metre-tall triangular audiovisial installation in Covent Garden’s East Piazza.

In minutes each message is automatically converted to text and projected across its walls in a beautiful and inspiring flow of wishes and simultaneously displayed at the www.spinvoxwishing well.com website.

These messages have been a mixture of the touching, the poignant, the funny and the plain bizarre!

Since its launch on December 12th, the Wishing Well has seen countless wishes of a sexual nature, two marriage proposals, 75 declarations of love, countless recession/money-related wishes as well as an array of hopes for better weather in 2009!

There have been over 30 requests for animals as Christmas presents. Girls Aloud are the most wished-about celebs with Rachel Stevens and X-Factor winner Alexandra Burke also scoring highly.

To mark the New Year, SpinVox has unveiled its top ten favourite wishes cast in the Wishing Well over the festive period:

3. I wish George Bush had been hit by that shoe.

5. I wish I could travel to work by jetpack.

6. I wish that mini cab drivers would not use SatNav all the time and believe it always works.

8. I wish people would stop moaning about the credit crunch.

9. We wish that the Queen would come and stay for a night.

10 I wish people would stop wishing, wishes only come to people who don't wish.

James Scroggs, VP of Consumer Business, SpinVox says, “We’ve seen people from London and all over the world casting their wishes at the Wishing Well as well as people popping inside, relaxing and taking in all of the hopes and dreams that have already been made.”

“As expected, there have been a lot of personal wishes, but I’ve been really surprised that people seem more interested in wishing for the ‘general good’, rather than just thinking about themselves. Perhaps tougher times in 2009 will see us all being a lot less selfish.”

SpinVox is a voice to text service designed to make life simpler and more convenient. With SpinVox You can receive voicemail messages converted to text and sent to you as SMS texts and email or make notes to yourself on the go with the Memo service. You can also speak blog posts and social network updates, all by simply dialling a number on your mobile phone and leaving a message which will be automatically converted to text and posted on your chosen site. For users with several blogs and networks, a new ‘Ping through SpinVox’ service is available that simultaneously broadcasts spoken updates to over 30 social network sites.

SpinVox is free to anyone wishing to use the service to update their blog or social network. Visit www.spinvox.com for more. You can Ping through SpinVox by signing up at http://ping.fm/

For more information, or to enquire about interviews, please contact Ema Linaker, Global Consumer PR Director on +44 7771 770317 or ema.linaker@spinvox.com

SpinVox® is the world's largest privately-held speech technology company, providing the most successful voice to text messaging services which are used daily by millions of people. SpinVox services are available directly on www.spinvox.com and through leading carriers and service providers globally.

Through significant innovations in voice and network technologies, SpinVox has brought together the two most natural forms of communication - voice and text - to create the fastest-growing form of messaging: Voice-to-Content™.

Its award-winning service is not only upgrading voicemail - by converting voicemail to text for delivery as SMS or email messages – but is also empowering people to speak SMS messages or emails to anyone, from any phone. SpinVox also enables people to speak messages directly to their favorite web messaging services such as Facebook, Twitter and many other popular web networks.

As a carrier-class hosted service provider, any network, anywhere in the world can rapidly implement SpinVox and it is now live with Alltel, Cincinnati Bell, Sasktel, Rogers, Telus, Telstra, Vodacom South Africa, Vodafone Spain, Movistar Chile and Livejournal and has announced a deal with Skype.

At the heart of SpinVox is its ground-breaking Voice Message Conversion System™ (VMCS), which works by combining state-of-the-art speech technologies with a live-learning language process. VMCS now serves users across five continents in English, French, Spanish,German, Portuguese and Italian..

The following active services make use of SpinVox: