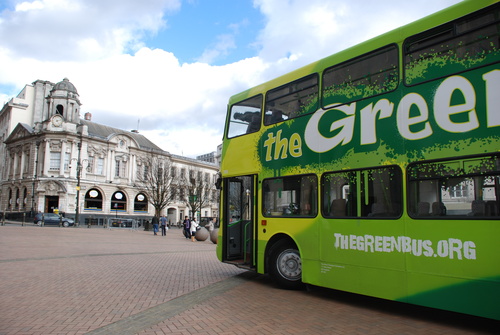 Gothenburg, Sweden, January 13th 2009 – Icomera AB, the world’s leading provider of cellular broadband gateways, and The Green Bus, the emerging market leader in school transport thinking in the UK, have announced the deployment of free Internet access for students and real-time vehicle tracking on twenty-three routes served by the Birmingham-based school transport operator. The vehicles utilize Icomera's award-winning Moovbox M Series mobile broadband gateway that provides Wi-Fi connectivity on the move with actual download speeds in excess of two megabits per second. The Green Bus vehicles also leverage the Moovbox for GPS-based location, allowing parents to track a bus's progress in real-time from any web browser. The Green Bus was established in 2005 by a former teacher and now operates environment-friendly bus services for schools throughout the West Midlands. The company's eye-catching double-decker buses carry over 1,400 children to and from school each day – replacing an estimated two thousand car journeys in the process – with routes designed to travel as close as possible to students' homes and removing the need for passengers to change buses en route.

"We want to make the experience of travelling with us a positive one for the new generation of tech-savvy school children," said Ian Mack, Managing Director at The Green Bus. "With an increasing number of mobile phones and handhelds supporting Wi-Fi, our investment in Icomera's Moovbox enables students to check email, surf the web, and play peer-to-peer games on devices like the Sony PSP and Nintendo DS – all free of charge. More importantly, the built-in GPS functionality of the Moovbox means we can see where our buses are at any time; this feature is being made available on our web site where parents and school staff can securely log in and follow the progress of any particular bus is during its journey via a familiar Google Maps display."

The Wi-Fi service, which is free to all bus pass holders, has been popular with students since its launch late last year with over 50% of users spending more than 20 minutes online, and 25% using the service more than five times. Research has shown that students prefer to travel in the social atmosphere of bus rather than by car, while for parents The Green Bus is more convenient, cost-effective and reduces peak-time congestion outside schools.

"Across our Moovbox deployments worldwide Wi-Fi usage by students is the next biggest demographic after business travelers," said Dave Palmer, Senior Vice President of Worldwide Sales at Icomera. "The Green Bus’s commitment to providing Wi-Fi access to its school-age passengers while leveraging the GPS capability for schedule adherence and parent reassurance sets a new standard for other school bus service providers to follow."

About Icomera AB
Established in 1999, Icomera is the world’s leading provider of cellular broadband gateways delivering Internet connectivity for passenger transport, public safety and enterprise applications. Icomera technology bridges wide-area cellular networks such as 3G/HSPA and WiMAX with local Wi-Fi and Ethernet access. Icomera’s award-winning Moovbox devices are deployed on rail, road and sea serving millions of Wi-Fi connections, and providing real-time high-speed access for fleet tracking and mission critical on-board systems. Icomera reported over 3.7 million sessions by over one million passengers in the twelve months to October 31st 2008 on its in-vehicle Moovbox systems worldwide, a 272% increase over the period. Icomera is headquartered in Sweden with offices in the United Kingdom, and channel partners worldwide. For more information visit http://www.icomera.com.

About The Green Bus
Established in 2005, The Green Bus is a Birmingham-based business that aims to deliver modal shift. Its core expertise is in the education sector: The Green Bus’ aim is to reduce the number of car journeys to schools by providing parents and pupils with a high-quality alternative. Ian Mack, its Managing Director, has backgrounds in retail (with BAA plc), in public transport and in teaching: with The Green Bus, his aim is to achieve sustained business growth and modal shift by delivering excellent customer service. It is expected that The Green Bus will appear in Berkshire, and at community schools in the West Midlands in a joint project with Centro, from September 2009. Having spent a number of years developing The Green Bus product, and having delivered significant modal shift in a number of schools, the company is now positioned to roll its model out across the UK and beyond.