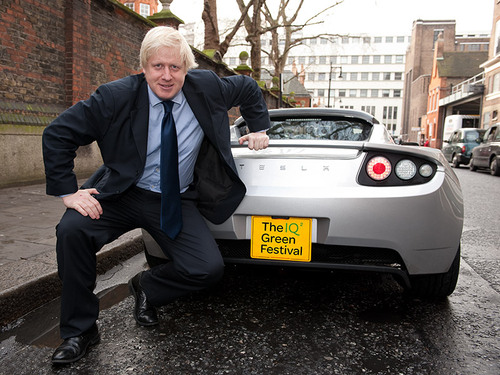 The Tesla Raodster is a history-making car which is sexy, sporty and green

The Intelligence Squared Green Festival on Climate Change is a non profit all day event which has attracted some of the foremost experts in the world to debate the most important topic of our age. The festival aims to raise awareness and stimulate debate on the scientific, regulatory, economic and social dimensions of climate change and to look at what should be done at government, corporate and individual levels to tackle the challenges we face.

Today Mayor of London, Boris Johnson, who has said many times that his next car will be electric, tried out the world's first 100% electric luxury sports car, as part of the festival’s publicity campaign. “What I really want is a people carrier” he said to Don Cochrane, Sales and Marketing Director for Tesla in the UK. “You’ll get one” replied Don. In reality Tesla’s Model S, a four-door sedan, will be on the market in the UK in two years time. Their people carrier will take a little longer.

The festival is offering four ticket buyers the chance to test drive the Roadster in a prize draw available on its website – www.iq2greenfestival.com.

The Tesla Raodster is a history-making car which is sexy, sporty and green . It has a sleek, Lotus-related design, runs from 0 to 60 in less than four seconds, burns no oil and recharges its battery with a 13 amp plug. It can be driven with the roof down even in our current weather as its heated seats keep drivers nice and warm. The car will go on the market in the UK in May 2009 priced at £92,000.

The Climate Change Festival takes place on Sunday January 25th at the Royal Geographical Society and will feature not just the debates and discussions that Intelligence Squared is known for, but also lots of climate-related activities – the chance to see an exhibition of award-winning climate change photos, to explore a solar powered house, test drive a G-Wiz and win other green prizes worth hundreds of pounds.

Speakers include botanist and broadcaster, Sir David Bellamy, Nobel-prize laureate, Professor Mohan Munasinghe – Vice Chairman IPCC, Professor Robert Watson - DEFRA’s Chief Scientific Advisor, Christine Loh – one of TIME magazine’s ‘Heroes of the Environment’, Tony Juniper, Special Advisor to the Prince’s Rainforests Trust and Svati Bhogle, winner of 2008 Energy Champion Ashden Award. ‘How Long Have We Got?’, ‘Can Asia Go Green? And if it doesn’t has the world had it?’, ‘Can technological Innovation save us from disaster?’ and ‘The UK Political Parties Don’t Mean What They Say on Climate Change’ are some of the issues up for debate.

A group of sixth formers, chosen with The Royal Geographical Society, will run the first debate of the day, debating the motion ‘Climate change is the Greatest threat facing humanity’ – an event chaired by polar explorer Ben Saunders.
To test drive the Tesla Roadster, first ever electric sports car, enter our prize draw by booking a ticket.

Tickets for individual sessions cost £10.00 or £15.00 or you can buy a day pass for £50. Tickets for young people aged 18 and under are 75% off, for stuents, 50% off. (See website for details).Buy tickets and learn more at the festival website http://www.iq2greenfestival.com