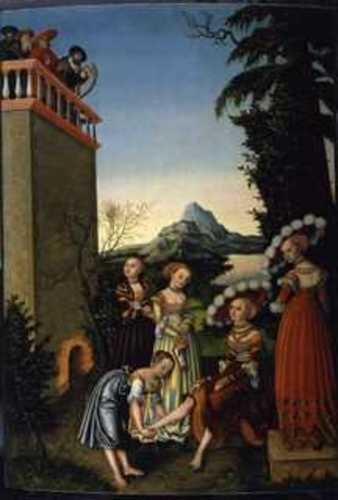 Among the highlights of the Bernheimer-Colnaghi stand at TEFAF this year, is David and Bathsheba, a masterpiece by Lucas Cranach the Elder (1472-1553). The story of David and Bathsheba was a popular subject in Renaissance Germany and one that was treated by Lucas Cranach and his sons on a number of occasions and in a variety of media. Dated 1534, the Colnaghi-Bernheimer painting is an important and unusually grand treatment of the theme by the artist. It is a superb example of the refined and meticulous technique for which Cranach was justly famous in his lifetime, evident here in the richness of the costumes and the elaborate landscape setting.

Another masterpiece to be shown is St. Mark by Frans Hals (1580-1666), one of the greatest portraitists in the history of art. Hidden from public view for 30 years, St. Mark is one of a set of paintings depicting the Four Evangelists, the only known extant religious works by the artist. Acquired by Catherine II of Russia for the Imperial Hermitage, St. Petersburg, in the eighteenth century, the series was deaccessioned in 1812 and sent to a church in Crimea, at which point the works disappeared for over a hundred years. In 1959, St. Luke and St. Matthew were rediscovered in the store of the Odessa Museum and in 1997 the St. John reappeared at Sotheby’s, London where it was bought by the Getty Museum.
St. Mark was rediscovered in the 1970s masquerading as a Portrait of a Gentleman, with lacy ruff and sleeves added in the 19th century. Cleaning confirmed the true identity of the Saint, and has revealed the dazzling brushwork and expressive charge characteristic of Hals at his best. The re-emergence of St. Mark onto the art market allows this remarkable series to be completed and reconsidered.

There will also be a selection of fine French works from the 17th to 19th centuries, among them an exquisite landscape on copper by Pierre Patel (1605-1676), a marine landscape by Claude-Joseph Vernet (1714-1789) and a newly discovered portrait by Alexis-Simon Perignon (1806-1882). French paintings from the 18th century include a superb portrait by Joseph Siffred Duplessis (1725 –1802). One of the most accomplished French portraitists of the second half of the 18th century, Duplessis worked as court painter to Louis XVI and Marie Antoinette. The Colnaghi-Bernheimer portrait depicts Pierre de Buissy (1743-1787), lord of Longpré and Master of the Hunt to the Comte d’Artois, and remarkably it remained in the family of the sitter until 2008. Executed in the mid 1770s, it reveals the artist’s talent for portraying his subjects with great psychological sensitivity.


Also from the 18th century is a charming painting by Louis-Michel Van Loo (1707-1771), Spanish woman playing guitar. Recently rediscovered, the work was once in the collection of the Prince de Conti (1717-1776), along with its probable pendant A German woman playing the harp (Private Collection). In the Colnaghi-Bernheimer picture, the artist presents his characters in an idealized scene of domestic bliss and has clearly taken great delight in rendering the contrasting colours and textures of the fabrics to create a vision of opulence and sumptuousness.

A number of works from the Italian school of painting will be shown. These include: a dazzling bozzetto by Gaetano Gandolfi (1734-1802) depicting Saint Giustina and the Guardian Angel commending the soul of an infant to the Madonna and Child; a fine painting by Alessandro Varotari called Il Padovanino (1588-1648), Venus blindfolding Cupid, after the masterpiece by Titian in Galleria Borghese, Rome; and a magnificent Saint Bartholomew by Luca Giordano (Naples 1634 – 1705 Naples), one of the major figures of Italian Baroque painting. Executed when the artist was not yet thirty, this newly discovered Saint Bartholomew is an important addition to the artist’s oeuvre and a powerful example of the naturalism that characterized Neapolitan painting in the first half of the 17th century. The strong chiaroscuro, emotional intensity and dramatic posture of the Saint all combine to give the painting an undeniably strong emotional charge.

Colnaghi-Bernheimer will also be bringing several fine works by Dutch and Flemish masters such as Jan van Goyen, Jan Brugehel II, David Teniers II, Johannes Lingelbach, Jan van Huysum and Jan van Os. Highlights include: Christ’s Descent into Limbo by Herri met de Bles (1480/1500 - after 1550), whose fantastical creatures and infernal setting recall the paintings of his great Flemish precursor Hieronymous Bosch; and a highly important large-scale painting depicting The Meeting of Joseph and Jacob executed by Frans Francken the Younger (1581-1642) in collaboration with Abraham Govaerts (1589-1626) and Hans Jordaens III (c. 1595-1643). In this extremely rare three-way collaboration, Francken was responsible for painting the main figures, Govaerts for the landscape and Jordaens for the long procession of Israelites on the left of the picture. Francken employed a unique oil painting technique of transparent multi-coloured glazes to capture the changing effects of light on textiles, a fine example of which can be seen in the figure of the pageboy on the right, taming the horse.

Highlights among the Northern still lifes is a rare work by German artist Georg Flegel (1566-1638), who is considered, along with Sebastian Stoskopff (1597-1657), the most important German still-life painter of the first half of the 17th century. Still life of flowers in a vase and a goblet, with a frog and two pears is a showcase of Flegel’s ability. Executed on copper, it typifies the artist’s skill in capturing a variety of surface textures with cool objectivity. Although small, it features objects of rarity and value and was most likely painted for a connoisseur. Another highlight is a floral still life by Jacob van Walscapelle (1644 – 1727). Still life of flowers and a branch of peaches in a sculpted vase shows a strong command of colour and lighting, which is used to order the composition and create a convincing sense of three-dimensionality. Although compact, the arrangement of flowers is not densely populated, creating a harmonious composition of curves and rounded shapes.
Ends
Notes to Editors:

P. & D. COLNAGHI & CO., LTD.
Colnaghi was established by Paul Colnaghi and his partner Anthony Torre in Paris in 1760. The original shop in Paris, known as the ‘Cabinet de Physique Experimental’, dealt in scientific instruments imported from England and they quickly branched out into print selling, importing English mezzotints and barometers. After managing a new shop in the Palais Royale, Paul Colnaghi took over the London branch of the business, based in Pall Mall in 1783, and as a result of the French Revolution transferred the business to London becoming print sellers to the Prince Regent (later George IV). Colnaghi established itself initially as the premier dealership for prints. By the end of the 19th century the firm had begun dealing in Old Master paintings and drawings and was instrumental in the formation of some of the most important American collections, including that of Isabella Stewart Gardener, Henry Clay Frick and Andrew Mellon. In 2002, the Old Master paintings dealer Konrad O. Bernheimer, the fourth generation of one of Europe’s major art dealing families, acquired Colnaghi. Under the Colnaghi umbrella, Bernheimer joined forces with the renowned Old Master drawings dealer Katrin Bellinger. In October 2006, Hauser & Wirth opened their third London gallery at the Colnaghi building in Bond Street – Hauser & Wirth at Colnaghi. Bernheimer and Bellinger continue to maintain a presence in Munich, Bernheimer Fine Old Masters, and Katrin Bellinger Kunsthandel. Colnaghi continues to operate as one of the world’s most important dealerships, specializing in Master paintings and drawings from the fifteenth to the nineteenth century.