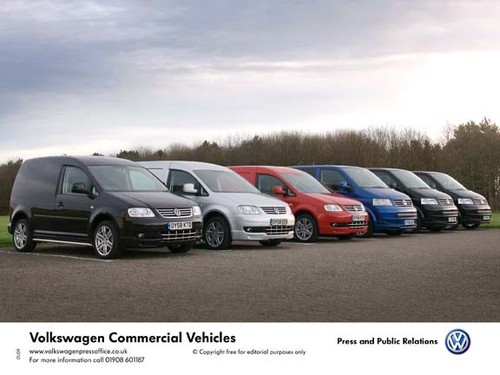 Volkswagen Commercial Vehicles www.volkswagen-vans.co.uk has sold a record number of 503,025 vehicles globally over the last year (+2.9 per cent growth) maintaining its position as the number one van importer.

Highlights of the year for Volkswagen Commercial Vehicles included: the launch of the VW Caddy Maxi panel van and seven-seater Life MPV, which added nearly 2,000 registrations (1,365 panel vans, 547 Life); expansion of the stylish Sportline range to include Caddy and Caddy Maxi; competitive vehicle finance offers to help customers budget their cash flow; the graduation of record numbers of master technicians from Volkswagen’s apprenticeship programme; and the development of the dedicated Volkswagen Van Centre network with new facilities at Croydon and Glasgow.

‘It is all about supporting our customers’ demands and serving the market with offers that are relevant to them,’ said Simon Elliott, who joined as Director of Volkswagen Commercial Vehicles in August 2008.

‘Volkswagen Commercial Vehicles is standing by its reputation, protecting the residual values of its customers’ investments, and supporting them with affordable finance solutions and a credible and committed Van Centre network. I couldn’t have joined a better or stronger brand in the commercial vehicle sector. We are ready to grow our market share again in 2009,’ he continued.

Commenting on the brand’s record sales worldwide in 2008, particularly in Central and East Europe, Stephan Schaller, CEO of Volkswagen Commercial Vehicles said: ‘Despite the difficult market trends in the second six months of the year we have achieved the best ever sales in the history of our company which we are proud of, and rightly so.

Of course, Volkswagen Commercial Vehicles cannot avoid the changed economic environment, but we are holding on to our long-term goal of selling 750,000 commercial vehicles by the year 2018. The new pick-up, further new products and entering new markets will continue to strengthen the sales and profitable growth of the Volkswagen Commercial Vehicles brand in the coming years,’ he continued.

Once again, the popular Transporter van was Volkswagen UK’s best selling commercial vehicle, followed by the Caddy, Crafter and the new Caddy Maxi, respectively. 178,000 VW Transporter vehicles were sold to customers across the world in 2008, followed by 151,570 Caddy vans and 51,100 Crafter vans. The UK remains the largest export market for Volkswagen Commercial Vehicles.