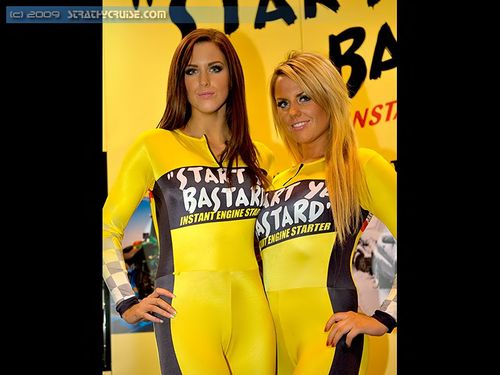 Australian motor company Nulon used the recent Autosport International to launch their flagship product ‘Start Ya Bastard’ to the UK, to huge success.

Many of the tens of thousands in attendance at the recent Autosport International event held at the NEC, Birmingham, remarked how the Nulon “Start Ya Bastard” stand was the ‘star of The Aftermarket Show’, ensuring the success of the event was far beyond Nulon’s expectations.

The UK CEO William Findlay and company co-MD Greg Simons from www.Nulon-uk.com were in attendance to formally launch engine starter product “Start Ya Bastard” to the trade and public, having successfully secured deals with distributors FPS and Saxon.

Particularly popular during the event were the Start Ya Bastard girls themselves, The Sun’s Page 3 girl Katie Leigh and Lucy Gaffney, wearing figure hugging bright yellow ‘Start Ya Bastard’ cat suits. The SYB girls were in huge demand by many co-exhibitors. CAT Magazine even requested to use the models in their prestigious CAT Awards ceremony, given their popularity with those in attendance and camera-friendly appearance.

Nulon ‘won the PR battle’ according to one particularly large and influential car enthusiasts website.

Rikki, from www.Strathycruise.com had the following to say about Nulon’s efforts,

“The PR team that stole the show (as voted by us all, females included) were the "Start Ya Bastard" girls. The marketing guys at Nulon had a triple win on their hands, firstly for the name of their product, something that has already caused a lot of heated debate (and free publicity), secondly for having amazing looking models that everyone took photos of and last but not least, they got their branding 100% spot on with the girls costumes.

“People were saying "have you seen the Start Ya Bastard girls?" because their product name was right there in bold letters across their chest and also neatly printed on their bums, whereas on other PR girls you couldn't tell who the hell they were working for as the company names were either too small or in the wrong place.”

Greg Simons was amazed at the success of the show,

“The response to our display was unbelievable. I’d love to say it was because of William and I and our presentation skills, but to be honest, the product itself and the Start Ya Bastard girls were all the stand needed!

“We hope to have left a good impression on the people that matter, and look forward to releasing a fuller range of our market-leading Australian products to the UK in the near future.”

For further information/pictures, or to arrange interviews or for samples to be sent to your offices, please get in touch with Rich Leigh, 10 Yetis PR Agency on 01452 348 211 or with rich@10yetis.co.uk.

Start Ya Bastard retails for £4.99 in all good retail and trade outlets

Nulon Ltd is a family owned business based in Sydney, Australia