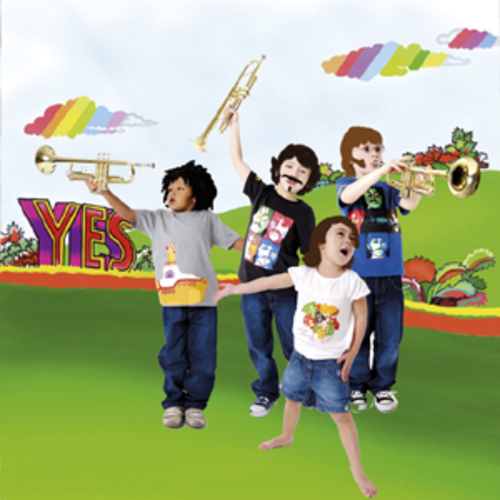 We take great pleasure and pride in announcing our new range of fully licensed Yellow Submarine product. The film celebrated its 40 year anniversary in 2008, so what better way to mark this occasion than a release of new tops featuring unusual stills from the film. We have used a broad selection of designs taken from the ground breaking animated feature film. Featuring the main submarine design as well as designs taken from the Sea of Science section and the Lucy in the Sky with Diamonds section.

The Lucy in the Sky with Diamonds is a fantastic design which stands alone in style from the rest of the film with its loose brush strokes and rich colours. What better to embellish the Lucy design with than ‘diamonds’? We have Swarovski Crystalline™ elements to give the design added sparkle.

The Beatles - Lucy in the Sky Smock Top
RRP £17.50 (1-2 yrs) £19.50 (2-10yrs)
This has a smock shaped top, with wide waistband and puff sleeves. It features a striking still from the Lucy in the Sky with Diamonds sequence from the animated feature film, The yellow SubmarineÔ. To further the theme we have embellished it with ‘diamonds’ from the CRYSTALLINE™ Swarovski Elements range, which are also OkÖtex approved.

The Beatles - Pulse!
RRP £17.50 (1-2 yrs) £19.50 (2-10yrs)
Taken from the same Sea of Science sequence as the Pop! Design the faces of the Beatles sit around a pulse of sound. It is on the blue t-shirt with The yellow SubmarineÔ branding on the sleeve.

The Beatles - The yellow Submarine™
RRP £17.50 (1-2 yrs) £19.50 (2-10yrs)
We couldn’t have a The yellow Submarine without featuring the submarine itself! We’ve given it a modern twist by scaling it right up as large as we could. If you look closely you can see the Beatles’ heads at the porthole windows! On grey marl jersey, we’re sure this will be a hit!

Product and lifestyle shots and samples available on request in high and lo resolution JPEGS, PDF‘s, Tiffs and GIFs.

For further information on the full range or possible promotions then please contact Alex or Caroline at the Green Eyed Monster offices: