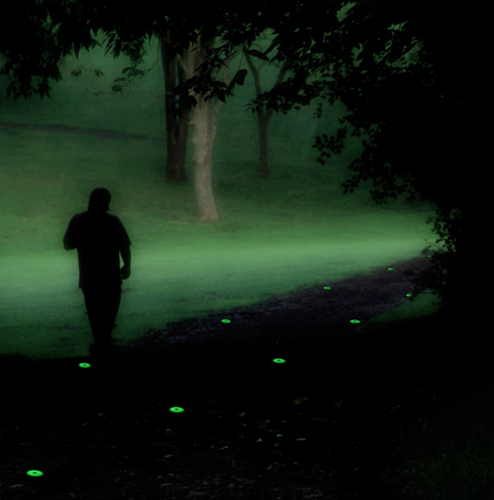 TraxEyes™, a UK invention, is lighting the way ahead for councils to use totally green technology to save massive amounts on the cost of street lighting, while substantially improving safety for pedestrians and cyclists.

Currently being deployed by Bristol City Council, TraxEyes™ is a revolutionary green glowing stud to light pedestrian and cycle pathways. The device, which costs less than a four pound each, glows brightly for 12 hours after just eight minutes of daylight and is guaranteed for five years operation. Importantly, no wiring, electricity or batteries are required and installation is quick and simple.
As TraxEyes™ inventor, Grant Taylor points out, you can’t get lower than zero running costs for pedestrian lighting, which is why several cash-strapped UK councils, whose street lighting bills run to millions, are urgently testing his company’s TraxEyes™ Safety Illumination system.

Bristol city’s installation is typical of the contribution TraxEyes™ can make to council’s enormous electricity bills, according to Grant Taylor. It costs from £36 to £90 a year to run just one street light as opposed to zero running cost of Traxeye™. For a pedestrian route through the St. Werburgh area of Bristol city, the council has opted to try TraxEyes™ for one of the first infrastructure schemes of the Cycling Demonstration City Project to be constructed in an environmentally sensitive area.

That deployment also underlines another key point about TraxEyes™ – the patented brightly-glowing compound is non-radioactive and completely safe for the environment.

And it’s not just councils who are attracted to TraxEyes™. For example, English Heritage has deployed 100 of the units to highlight the edge of the pathway on top of Berwick-upon-Tweed Ramparts. However, here the focus is firmly on safety. Over the past two decades, there have been over 30 serious injuries relating to falls from the ramparts, including four fatalities. As Rob Flower, English Heritage’s head of visitor operations for the North East pointed out, in the face of these statistics, appropriate safety measures needed to be put in place. British Waterways Partnership in Lincolnshire are now currently testing TraxEyes™ for similar vital safety reasons, along with Network Rail and several other UK utilities.

As Grant Taylor points out, electricity bills make up around 40% of UK local council budgets. To save money, several UK councils are already turning off what they deem as non-essential street and pedestrian lighting. For Grant, it doesn’t have to, and indeed it shouldn’t, be all or nothing. “TraxEyes™, with their zero installation costs, zero running costs, zero maintenance, zero CO2 omissions and proven safety benefits can make an enormous contribution.”