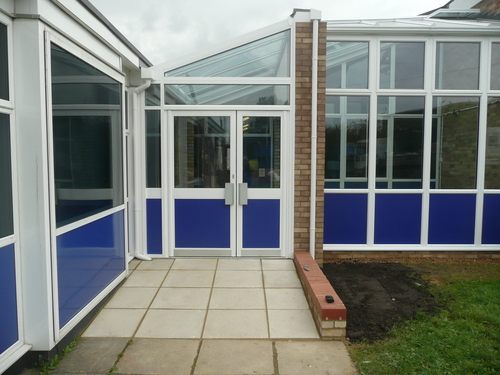 Hazlemere Commercial, a major Division of the Hazlemere Group, have been recently awarded the prestigious Quantal Award for their Lane End School installation, which they carried out in 2008 at this Primary School in Edmonds Road, Lane End, High Wycombe, Bucks.

Quantal awarded Hazlemere commercial windows, Buckinghamshire, the 2008 Commercial Installation of the Year Award in the education sector category for this Bucks school project. The project involved the construction of a new entrance lobby with a bespoke aluminium Quantal glazed roof to increase security and management of pupils, staff and the school’s many visitors and trades folk.

Hazlemere Commercial projects delivered this improvement scheme on time and on budget during the school summer holidays in 2008, despite discovering difficult ground conditions, when an unusually high water table was exacerbated by unseasonably wet weather. When excavation work commenced water was discovered “flowing” underneath the existing school building.

These unexpected working conditions were overcome in conjunction with Wycombe District Council Building Control and Buckinghamshire County Council’s principal surveyor for the district’s schools. Hazlemere Commercial’s operatives had to fit specialised drainage beneath the lobby concrete floor, to allow the excess water to drain away to soak-aways.

Tony Beale, Sales Director of the Hazlemere Group commented: “To have won two prestigious awards within a week for the quality of our fabrication and installation of double glazed aluminium roofing systems throughout 2008 is a testimony to the calibre of our experienced fabricators and craftsmen, both on our factory floor and on site, who collectively deserve the recognition that Quantal have seen fit to kindly bestow upon us. The Hazlemere Group is very much a team effort from our consultants to our surveyors, fabricators and fitters; they all deserve praise for maintaining the high standard of workmanship that has made Hazlemere such a highly successful family business.”

Ends
Editors Notes:
Hazlemere Commercial is a major division of the Hazlemere Group, designing, fabricating and installing quality architectural aluminium products to the Commercial sector, with its head office and factory in High Wycombe, Bucks.
In 2007 Hazlemere became the first company in the UK to design, manufacture and install an ‘A’ rated dual frame aluminium energy saving window system.

For further information about Hazlemere Commercial or the Hazlemere Windows, Doors and Conservatories activities and capabilities visit http://www.hazlemere.co.uk