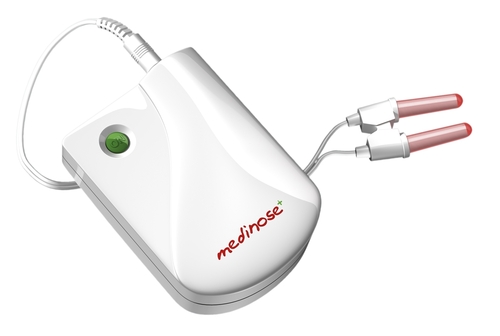 Congestion, runny nose, watery itchy eyes and headaches - just some of the symptoms that blight the daily lives of around 15% of the UK’s hay fever sufferers. Now the completely drug and side-effect free red light therapy used in Medinose heralds a breakthrough in the way hay fever and allergies are treated.

Common forms of allergic rhinitis such as hay fever and dust allergies trigger an immune response when the body comes into contact with allergens such as pollen, dust or fungal spores. The body produces IgE antibodies to fight the allergen and histamine is released triggering symptoms which can include: a blocked and runny nose, sneezing, itchy eyes, headaches, poor sleep, lack of concentration and generally feeling unwell.

Medinose uses phototherapy delivered by inserting its two probes directly into the nostrils which can help prevent and eliminate allergic symptoms within approximately two weeks of use. The red light acts on the cellular metabolism, slowing down the immune reaction and reducing inflammation of the nasal mucous membranes by inhibiting the release of histamine and sometimes completely eliminating allergic reactions in a natural way.

A double blind, placebo controlled trial was conducted to assess the effectiveness of Medinose. Following treatment, 72% of allergic rhinitis patients reported a reduction in symptoms and an improvement in their overall condition, compared to only 24% in the placebo group. Patients also received a nasendoscopy (examination of nasal tissue using an endoscope), which showed a significant reduction in nasal tissue inflammation after treatment. This is the ‘gold standard’ diagnostic evaluation for nasal conditions.

Medinose has developed this technology into its hand held FDA and CE approved class 2A medical device which is not only clinically proven but drug and side-effect free.

It uses a small portable power pack (about the size of an IPOD) which is lightweight enough to carry in your pocket, handbag or briefcase so that it is ready to use when you need it whether at home, work or on the move.

Use Medinose for 4-5 minutes 2-3 times a day. With severe symptoms, treatment can be repeated several times without any side effects. As soon as the symptoms subside, the number of treatments can be reduced.

Medinose is suitable for both adults and children. It is particularly effective at reducing symptoms associated with hay fever, dust and animal allergies and costs £79.95 from www.anhealth.co.uk or call 0870 350 1264.